No, I am not referring to the frogs that we sometimes find in our patio furniture (usually *before* we sit down), or the ones who like to hang out in and around our gas grill, or to the one that apparently decided to climb our sliding glass door a week or so ago (was he looking for a place to hibernate?)--they are big and ugly, but those are toads, not frogs.

When my husband's maternal grandmother passed away several years ago, the task of disposing of her belongings fell to her children, including my mother in law, Beaver-ly.  As we were going through the house and garage, Beaver-ly found this incredibly ugly green ceramic frog, with a large mouth opening that was supposed to hold a Chore-boy (which, if you don't know, as I didn't until about 10 years ago, is a scrubby sponge)--the frog was meant to be a kitchen decoration/tool.  I believe it was found in the garage--I certainly would have relegated the thing to the garage or basement--but I could be wrong.  We laughed and reminisced, and Beav put the ugly frog in the pile of items to be donated to some unsuspecting charity thrift store, I thought.

But I was wrong.  My fun-loving and tricky mother in law wrapped that monstrous thing in a dish towel and stuck it in a bag of items that Hubby and I were taking home with us.  When I got home and discovered the stow-away, I laughed so hard...and this is how it began.  For the next few years, when we had the frog we would bring it with us when we visited Hubby's family and leave it somewhere on the property, where it would be discovered, hopefully after we were long gone, and they would do the same, when they came to visit us.  I think we even named the little guy, but I can't recall what his name was.  It was a fun little game, and a nice way to remember Hubby's grandma.  And then he disappeared.  It's possible that the last time he made the trip from West Virginia to Michigan (or vice versa), he was hidden so well that we just never found him again--I'm not sure, I just know that he's no longer with us.


So now you might be thinking to yourself, that's a sweet story, but why, pray tell, are you relating it at this time?  I'm not sure what made me think of the ugly green frog right then, but this summer I did, and I asked my mother in law if she knew what had happened to it.  She didn't.  We laughed and reminisced, and that was the end of it, I thought.
Until, not too long ago, my father in law came to visit, and when he left I found this little guy sitting by my sink 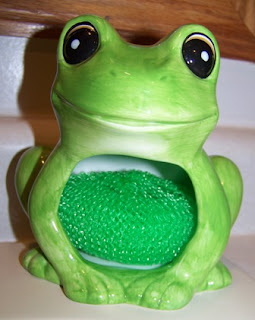 (OK, that's not exactly how it happened, but the frog was by our kitchen sink after B.J. left).  Wasn't that a sweet thing for Beav to do?  I haven't decided yet whether he'll be coming with us the next time we visit my in-laws--this guy is a whole lot cuter than the original froggy was.  Thanks, Beaver-ly :)
Posted by Scarlet Bluefield at 8:03 PM