Menu plan for the week of December 17

Hi friends.  Here's what's on the menu this week: 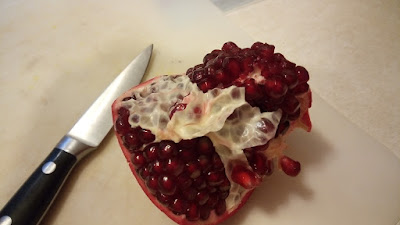 Other:
Posted by Scarlet Bluefield at 5:00 AM No comments:

Last week I told y'all my plan to complete that last pesky 2018 goal, and I just know you are all wondering how its going.

Today marks my first deadline, and the first thing I need to tell you is that it was a bad idea to make the deadlines be Fridays.  I don't think any other day of the week would have actually been any better, but I do know that Fridays are not good.

The second thing I need to tell you is that I met my first deadline.  I have made a list of what I want to include.  For now.  I'm sure that I will want to add more as this project progresses over the next couple of weeks, and through the years.  But for now, hooray!

If you need some ideas of what to include in your own household binder (or box or folder), here are some of the resources I consulted:


The Fidelity checklists are quite comprehensive, so you might want to just start with that.

Next up for me: gathering information and figuring out how I want to organize it.  See ya next week.
Posted by Scarlet Bluefield at 12:59 PM No comments:

Stories Behind the Great Traditions of Christmas by Ace Collins: a Review

Stories behind the Great Traditions of Christmas by Ace Collins contains 26 chapters, each explaining how a Christmas tradition came to be.  The traditions are listed in alphabetical order, and include Christmas cards, gifts, lights, poinsettias, and Santa Claus.

I enjoyed this book.  I like learning about little-known history, and discovering origin stories.  The chapters were short and easy to read.  The author's style was straightforward, and the book was interesting.  The order of the chapters felt a little stiff to me--I would have organized the book by categories or chronologically rather than alphabetically--but overall, this was an interesting, fast read.

I received this book for free from the publisher in exchange for my honest review.
Posted by Scarlet Bluefield at 1:29 PM No comments:

Fate of the carcass

Normally, I save the carcass from our Thanksgiving turkey to make turkey stock.  And by "normally" I mean, "for the last 3 or 4 years".  So, in other words, "normal" takes 3 or 4 times to become normal (the moral of the story?  Be careful what you do, especially if you don't want it to become normal).

Except there was that one year when we weren't at home for Thanksgiving, and I asked the hosts to save the turkey carcass for me, unless, of course, they wanted to use it, and they didn't think I was serious, because who would transport a turkey carcass 500 miles to make stock, and they threw it away.  We had to have turkey for Christmas that year, so I could make stock.

You probably guessed by my use of the word "normally" that we didn't save the turkey carcass this year.  I was all set to throw it away, because we still have a bunch of stock leftover from last year, when Hubby asked if I thought the chickens would like to have a go at it.  Sure, I said.  Why not?

You might be feeling slightly sick to your stomach right now, horrified that I would feed poultry to my poultry.  Truthfully, I'm feeling a little sick to my stomach right now (probably not because of turkey eating chickens, though).  The whole thing smacks of cannibalism, although I have to point out that cannibals eat the flesh of their own kind, and turkeys and chickens, while related, are not the same kind.

The thing is, chickens are omnivores, just like humans.  They eat both plants and animals.  And generally, the only animals chickens eat are the ones they can catch.  Like worms and bugs and the occasional frog.  They definitely might have eaten a mole last winter.  But if someone is going to offer up some other, already cooked, animal for them to eat, chickens are definitely going to eat it.

And so they did.  Those chickens devoured the leftover turkey meat on that carcass.  Hubby said it reminded him of those bugs they use to clean dinosaur bones.  Yeah.  I wasn't exactly sure what he was talking about either.  But I'm sure it's a thing.  The point is, there wasn't much left on those bones.

I was thinking about taking a picture to show you, but I thought that would be going too far, that y'all would not want to see that.  You probably didn't even want to read about it.

Instead, here is a picture of my favorite (and only) lap chicken. 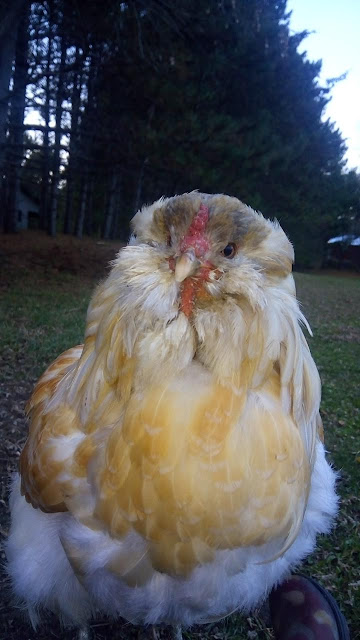 Posted by Scarlet Bluefield at 5:00 AM No comments:

Menu plan for the week of December 3

I am way on top of the menu this week.  I planned and typed this post on Friday, waaaaay back when it was still November.  This whole assigning a type of food to each night of the week definitely helps.

It's kinda weird, though, because last week, I set myself up so that I could postpone grocery-procurement until Wednesday.  My usual errand/grocery day is Tuesday, and lately, due to, well, life, I suppose, it's been Monday, which is no beuno.  Life is much better when I don't have to leave the house on Mondays.  But I had entered this pattern, and as much as I wanted to, breaking out seemed impossible.  I did it with the help of the menu framework.  And on Friday, I had my menu planned, and my grocery list written, for the following Wednesday.  Five days away.  Still two days away.  All that time in between.  It's making me feel a bit unsettled somehow.  I'll get used to it.  Hopefully I'll get the chance to get used to it.

When do you grocery shop?  And how far in advance to you make your list (or do you make a list at all)?


Other:
Posted by Scarlet Bluefield at 5:00 AM No comments: