The Girls: 20 weeks (aka the Toasty Crunch show)


So.  For those of you who found this post by googling something like:
how long will my pullet/hen/chicken
just coming into lay/beginning to lay
continue to lay rubber eggs/shell-less eggs/thin shelled eggs,
let me just get this out of the way right now.

As you know, if you have googled such a thing, the usual, and perhaps only, answer out there is: a little while.  Every hen is different.  Just be patient.  The girls are working out the kinks in their egg-laying systems.

Ha.  Easy for them to say, when we are waiting on pins and needles for those perfect eggs.

Here's my answer.  My hen (and I'm not sure whether it was the cinnamon queen or the barred rock--I used to think it was the cinnamon queen, but now I'm leaning toward the rock, based on other clues that have come to light), laid rubber/shell-less/thin shelled eggs every day, sometimes multiple per day, for 9 days, then started laying regular hard-shelled eggs.  Again, every hen is different, but perhaps that will give you a little peace of mind in the midst of what seems like a never-ending string of weird rubber-like eggs.

I need to be straight with you here and let you know that during that string of weird eggs, the temperature was warmer than usual, which might have been a contributing factor in the longevity of the rubber egg run.  But there it is.  Nine days, and probably 20 eggs.  I'm pretty sure we didn't even find all of them.

The girls have been with us for 20 weeks, which is about 4 1/2 months.  We've been getting 1 or 2 cute little eggs a day pretty consistently for about a week, which is fun.  It's a little like a treasure hunt.  I mean, when you have 2 dozen laying hens, pretty much anytime you decide to go check the nest boxes, you're going to find eggs, but not when you only have two.

A lot of people assume that chickens lay their eggs at the same time every day, but that's not true.  It takes more than 24 hours for an egg to form, so the girls lay the eggs more than 24 hours apart.  We haven't quite figured out the girls' laying schedule yet, so we just go when the mood strikes us, and sometimes we find an egg or two.

Speaking of having two laying hens, on Sunday morning, we found another two shell-less eggs.  So it's possible Esther is getting close to laying, or it's possible that Rocky succumbed to the heat and wasn't able to keep those eggs in long enough for the shells to deposit (one was perfect except for the lack of shell; the other was pretty much a yolk in a membrane. We know it wasn't Toasty Crunch, because she laid an egg later in the day, and there's no way she would have had time to form a third, perfect egg in that amount of time).  My gracious, y'all.  It was so hot.  And those poor chickens are wearing down coats.  It's ok if it gets hot during the summer, 'cause they're acclimmated to it, but this time of year?  Nope.  Not a good situation.

I helped the girls cool down a little bit using a three pronged aproach.  First, I gave them strawberries frozen in water, to cool them from the inside out.  Second, I put ice in their waterer.  Third, I made a little icewater bath that they could stand in, if they chose.  I don't think it helped a whole lot, but they did seem to appreciate my efforts.  And now, it's cool again, and we're all much happier and less pant-y.

And now for the Toasty Crunch show (she was exceptionally photogenic these past two weeks, I guess)!


For those of you who are wondering, yes, I am still buying eggs, although I only bought one dozen yesterday, rather than my usual 2 or 3.  Like I said, we've been getting one or two eggs a day, and I'd estimate they add up to about a dozen a week.  The eggs we're getting from our girls are about half size, which is actually kind of nice--there have been many times when I've wanted half an egg for various reasons--now I've got some.

I guess that's all for now.  I don't know if you've noticed this, but I love those silly birds.  They're more than just chickens; maybe I'll explain someday.  I miss Austro and Red, and I often think about how it would be if they were still with us.  My sis said they're probably out in the world having a grand adventure.  That's a much better way to picture them.  <3
Posted by Scarlet Bluefield at 6:00 AM No comments:

Menu plan for the week of September 25

It has been unseasonably warm here for the past several days.  It's autumn, according to the calendar, the meteorologists, and the position of the earth relative to the sun, but we've been in the high 80s and even over 90°, and humid.  I'm not positive, but I think this past week has been hotter than it even got during the summer (we were out of town during the hottest week of the summer, so it's possible it was warmer then).  It's reminded me of my week on a mission trip in Tennessee: it was so hot and humid that I would dry off after my shower, and immediately be wet again.  Yuck.

When it's hot (and humid), it's hard to even think about food, but somehow, I managed to come up with a menu for this week.  And praise God, it's supposed to be much cooler for the next several days.


Other:
Posted by Scarlet Bluefield at 6:00 AM No comments:

Menu plan for the week of September 18

Posted by Scarlet Bluefield at 12:26 PM No comments:

Remember when I said I was ready to deal with all of the stuff that goes along with owning chickens?

It turns out I was wrong.

A week ago, the girls were out free ranging.  Two of our chickens didn't come home that evening, and they are presumed dead.

I am distraught.  It's not like I didn't know that things like this might happen, but still, I feel sad, and guilty, and like I failed my girls.  This is definitely my fault.  I still get teary when I think about it.  Those poor, sweet chickens...

We don't even know what happened to them, although that's probably a blessing, because having the image of their torn-apart bodies in my brain would make this even worse.  It seems very strange for two of them to go missing together--chickens are so skittish, there's no way a single predator would be able to get two of them.  Nevertheless, they are gone.  I'm trying to take comfort in the fact that they had a good life.  It's not working very well.  It's the guilt.

The other chickens seem to be adjusting to their new normal.  Here they are eating some fermented feed.  Well, two of them were--Esther kept pecking at the bowl--it was the first time I used a yellow bowl for their feed, and she wasn't quite sure what was happening. 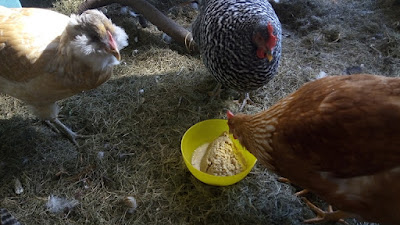 I don't think I can let the girls free range anymore, and they really, really want to... 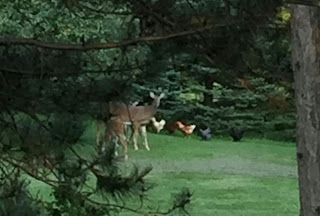 Before the tradgedy, the girls introduced themselves to the family of deer that frequents our back yard.

In other news, we found something eggstra in the nest box on Saturday. 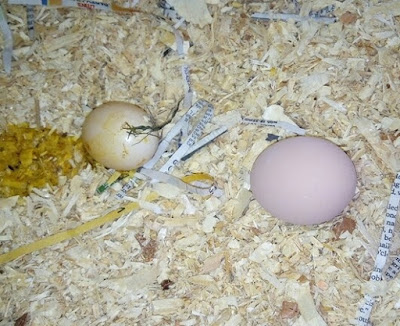 It was pretty eggsciting.  We think that part of the yolk didn't make it into the egg (here's how an egg forms)--we're postulating that's what the yellow stuff is to the left of the egg (the "egg" on the right is a nest egg).

I'm amazed and impressed that this egg appeared in the nest box.  I mean, we put the ceramic eggs in there to show the girls where eggs go, but if they've never laid an egg before, how do they know that there's an egg coming out?  Such clever girls. 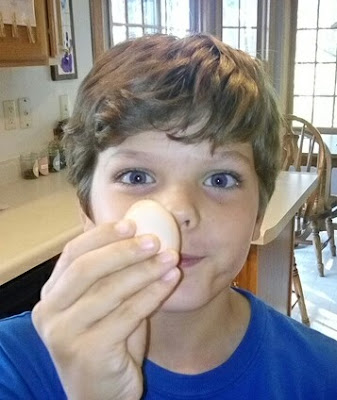 It was a cute little egg, as first eggs often are. 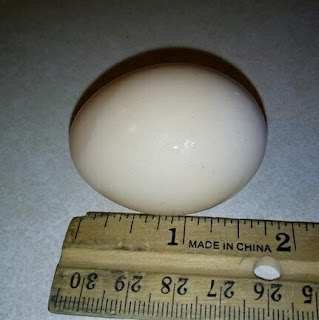 We think Rocky laid this egg, because her comb and wattles are the reddest and she was the only one who had been doing the submissive squat, but since we didn't catch her in the act, we're not sure. 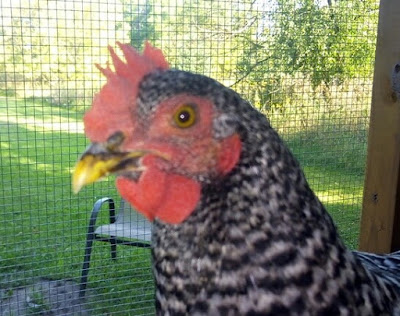 Rocky.  That chair in the background is where I sit to watch the girls (it's usually on the other side of the coop, but I move it around to get the best view).  I've heard of chickens being used as therapy animals and I can understand why. 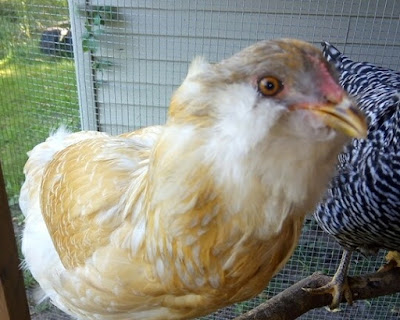 Poor Esther--the confinement is taking its worst toll on her.  She paces frantically back and forth in front of (or is that behind?) the door whenever I approach the coop.  Makes sense, since she's descended from jungle fowl.  Esther kept wanting to photobomb with her fluffy cheeks.  No wattles and her pea comb is still pink. 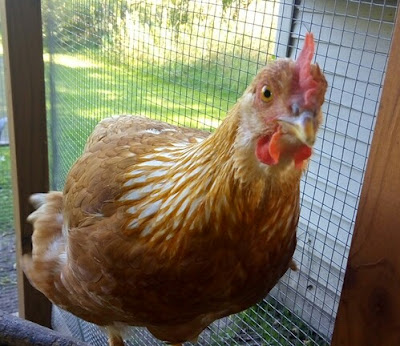 Toasty Crunch, looking prehistoric.  Just in the past week her wattles have gotten bigger and her comb has gotten redder.  She did the submissive squat for the first time on Sunday.

On Tuesday morning, Toasty greeted me with a loud bok, bok, bok-bok, baaaaaawk, as I walked out to the coop.  It seemed like she was trying to tell me something.  Turns out she was. 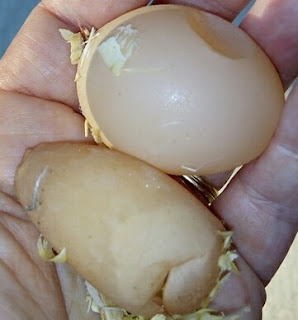 Now these are the weird, misshapen, thin-shelled eggs I was eggspecting for the girls' first eggs.  I think Toasty's is the oblong one, for various reasons.

Two chickens laying, one to go!  We're crossing our fingers for blue or green eggs from Esther.

Red and Austro <3
Miss them.
Posted by Scarlet Bluefield at 6:00 AM No comments:

Menu plan for the week of September 11

Things are about to get even more complicated at supper time, friends.  AKD begins working two evenings a week this week, and Cub Scouts starts up next week.  Will we ever eat supper as a family again?  Sure.  As soon as bike season is over.


Other:
Posted by Scarlet Bluefield at 6:00 AM No comments:

Menu plan for the week of September 4

Welcome to actual September, my friends.


Posted by Scarlet Bluefield at 7:00 AM No comments: