So, today I did something that I haven't done in a very long time, and actually never thought I would, again.  I made up a bed in a loft.  And then I told Code-man that he's on his own from now on :)
Here's a picture of Code-man's new bed...some people wanted to see pictures, but there really isn't much to see.  It's pretty high--taller than me.  When I went in to pray with him tonight, I couldn't put my hand on his back or head, as I have done pretty much every night for the last 10.25 years.  It made me wonder how much longer he and I will pray together at bed time.  Actually, if things keep going the way they have been, pretty soon I'll be going to bed before he does.  My baby is growing up. 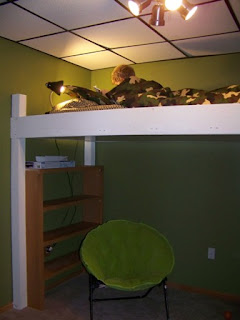 * * * * * * * * * * * * *
A few weeks ago, Code-man told me about a conversation that he had with one of his friends.  They were talking about how when they were younger (like waaaaay back in 3rd or 4th grade), the 5th graders all looked so big, and seemed so old, and they couldn't wait until they were in 5th grade.  It was almost as if 5th graders had taken on superhuman status in their 3rd and 4th grade minds.  But now that Code-man and his friends are 5th graders, they just seem normal to themselves.  They were saying, "we're not as big as those other 5th graders were," and commenting on how it's not quite as much fun as they thought it would be.

I kind of feel that way about being a grown-up.  When I was younger, the grown-ups looked so big and seemed so old, and I thought it would be fun to be one, in fact, I couldn't wait.  But now that I am a grown-up, I kind of can't believe it.  Seriously?  I'm responsible for the well-being of, not just myself, but of 3 defenseless kidlets?  Who thought that would be a good idea?  Really!  It seems ridiculous to me (but then I wasn't really the one deciding that I was a good candidate for grown-up-ness).  I would so much rather have someone else be the grown-up.

Ah, but the fact remains that I am, alas, a grown-up, and as such, I am supposed to be in charge of those little'uns.  I guess it's a good thing that they're less complicated when they're babies.  When a baby is upset, he will cry, and then a consciencious care-giver need only run through the list of possible factors: hungry, tired, lonely, wet/dirty diaper, gas.  We make mistakes and we grow and learn along with our children.  And as they grow, the factors become more complicated; the potential influencers: myriad.  Hopefully (and I emphasize the hopefully), by the time we get to the point where there's more at stake, we will have made enough mistakes, and learned enough, that we will somehow (somehow) stumble upon the right thing to do, so say, or even, not to do.

But oh, I feel so inadequate.  How does one ever know the "right" thing?  I am so not the right person for this job...and yet, I'm the only person for this job.  And so, we carry on.  All we can do is our best.
Posted by Scarlet Bluefield at 9:43 PM