Our new chicks have been home now for two weeks.  Oh, how time flies.  And chicks do, too.  Both Hazel and Indigo have made it to perches on top of the feeder and waterer, and Indigo attempted (and failed) to make it out of the brooder.  Koko likes to fly straight up, in the corner.  I'm not sure what's she's expecting to happen.

This week we put the screen on top of the brooder to prevent escapees, which I think is earlier than last year.  But I was just reading last year's two week chick update, and apparently those chicks were flying and escaping at two weeks, too.  I also added a "hat" to the waterer, to keep the chicks from using it as a stepping stone. 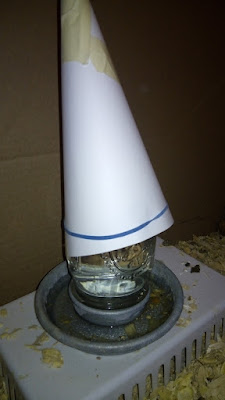 These chicks are so messy!  I changed that water about 10 minutes before the picture was taken, and there were already pine shavings in it.  Because of this, I'll be working on setting up a nipple waterer for the chicks this week.

I did not put a hat on the feeder (soon), but I did have a brilliant idea regarding the feeder.  Last years' chicks were constantly knocking their feeder over when they got to be around 5 weeks old, so I decided to bungee cord the feeder into a corner of the brooder this time. 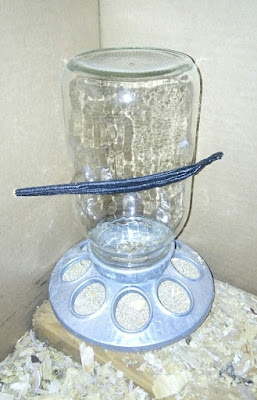 Except I wasn't sure where Hubby hides the bungee cords, so I used an elastic hair band.  There are paperclips holding it in place on the outside of the brooder.

I did a little redecorating in the brooder.  I hung the mirror, which up until then had been propped up in a corner.  The chicks are obsessed with this mirror.  I think they think it's a window and there are more chicks on the other side.

I saw Indigo taking a dust bath in the pine shavings the other day, so I added a dust bath, and of course I had to put it by the mirror.  I tell ya, it was an adventure getting that dirt.  The ground is frozen, even though our daytime temps have been above freezing lately (except Tuesday.  Tuesday was a cold(er) day).  There is some non-frozen ground, but it's muddy.  I thought I could just take some dirt from the chicken run, but it's pretty wet, too.  I ended up taking this dirt from the big girls' dust bath, which, to my knowledge, they haven't used all winter.  Of course, when I started taking dirt out, they immediately decided they wanted to take a bath in it.

The dust bath serves triple purposes.  The first, of course, is to bathe in.  The second is to provide grit to help them grind up food.  And the third is to expose them to Coccidiosis, so they can begin to build immunity. 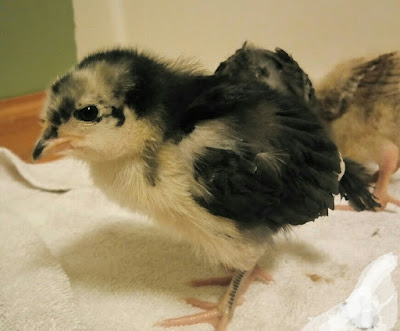 Koko is the smallest of the chicks, and she is a busy bird.  She digs and races around with her wings flapping and then digs some more.  She digs and flaps and runs with gusto.  She also likes to stand up tall and flap her wings.  And fly up in corners.  This is in direct contrast Austro, who was always very calm, and was one of the bigger chicks. 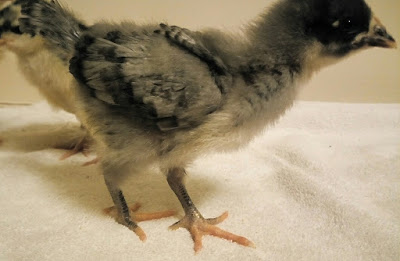 Indigo seems to be doing everything first.  First to fly up to the top of the waterer.  First to attempt an escape.  First to take a bath.  She's also very vocal, always peeping away. 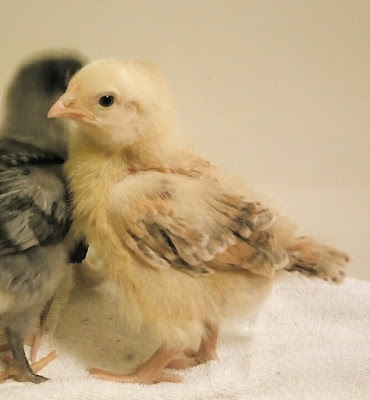 Hazel is still the biggest--she's twice as big as Koko.  It seems crazy to me that they're the same age.  It also seems crazy that Koko is supposed to be bigger than Hazel when they reach maturity.  She's pretty sweet and even tempered.  Except when she's stepping on Koko in the dust bath.  She seems to be the friendliest, which isn't saying much, since these chicks scatter at pretty much anything.  I've noticed some comb development on both Hazel and Indigo.


In other news, I collected three eggs on Monday.  Esther lays green.