How I do cards

And then I remembered.  Cards.  I needed to buy the cards so that AKD could sign them.  Or at least the ones between February and the beginning of May. 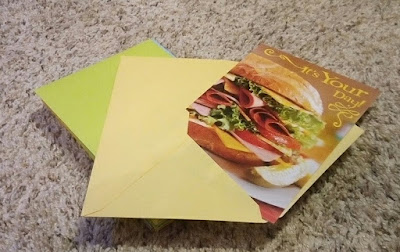 Here's the deal.  Sending cards is important to me.  I want my loved ones to know that I'm thinking of them, and I know how much I appreciate getting something in the mail that isn't a catalog or a bill.  But a couple of years ago, I wasn't sending cards.  I wasn't sending cards because it is such an ordeal to remember that someone's birthday or anniversary is coming up, then get to the store and chose a card, then bring it home, sign and stamp it, and actually get it into the mailbox.

OK, when I put it like that, it doesn't sound like so much of an ordeal.  But it totally is.  For me, anyway.  I hate shopping, and I am a notorious underbuyer.  If I don't absolutely need (and I do mean need) something, I talk myself out of buying it.  And it is very rare that I actually need to buy something right that second.  It can almost always wait a day or a week or forever.  Birthday cards?  I do not need.

So here's what I do.  I buy all of the birthday and anniversary cards for all of the family that I send such cards to all at once.  In one trip to the store.  I line the cards up on the floor in the card aisle to make sure I haven't missed any, and other customers walking by look at me funny.  Also, the cashier usually looks at me funny, as does the customer in line behind me who is buying only one card.

Yes, it is an ordeal (and sometimes I forget which card is for which person by the time I get home), but it is only a once a year ordeal instead of a 20 times a year ordeal.  I would buy all of the other cards on that day too, like Mom's and Dad's day, Easter, etc, if they were available in January.

When I get home, I take about 15 minutes to address the cards and sort them in date order.  I write the date of the event in the upper right corner where the stamp will eventually cover it up, and then I put a reminder in my phone to post the first card a week before the first date.  When that reminder pops up, I get everybody to sign the card, stamp it, put it in the mail, and set a new reminder in my phone to post the next card.

Yes, it is more work up front, but it saves so much time and effort throughout the year.  And it works, too.  We only missed one card this year, and that was because the recipient wasn't going to be home on his birthday and I didn't have the address where he would be and then I ran out of time before going out of town and forgot to bring it with me (we sent it late.  He probably thought it was weird, but that's OK).  This method also accomplishes my goal of letting loved ones know they're thought of.  They don't have to know that they were actually thought of in early January.  Well.  I guess they know now.

Here's a tip: I buy my cards at Dollar Tree, because there they cost $1.  Some of them are even 50¢.  And they're Hallmark cards, y'all!  I don't even want to think about buying 20 cards all at once at $4-5 a pop.  And the folks I'm sending cards to don't care.  In this case, it really is the thought that counts, not the price tag.

Here's another tip: The cost to post a first class letter is going up 5¢ on Sunday, so get to the Post Office today or tomorrow to buy some Forever stamps if you're running low.

So that's it.  That's how I do cards.  Do you send birthday and anniversary cards?
Posted by Scarlet Bluefield at 5:00 AM

Email ThisBlogThis!Share to TwitterShare to FacebookShare to Pinterest
Labels: hack