You know, I've heard that expression, "knee-high by the 4th of July," referring to corn plants needing to be that tall by then in order to get a good harvest, but I always kind of thought that seemed a little short. Where we live, there are only 2 more months of growing season by the 4th of July, and it seemed like if it had only grown 18" or so by then, no way was it going to make it to harvest. However, now I realize that corn grows faster as it gets bigger. Take a look at the corn on June 26 (click here and scroll down), and today--I've included Code-man (who is about 53" tall) in the picture for comparison--the corn is taller than he is. 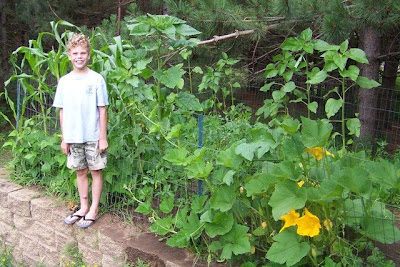 That's a sunflower to Cody's left (our right, as we look at the picture), then come the tomato plants (you can just barely see them), the lone pepper plant, and the pumpkins, which are attempting to take over the entire garden. We harvested some green beans yesterday, and will have them for supper tonight (since Hubby's out of town, that might be all we have). I've spotted the first zucchinis and tomatoes as well.

In other news, we have decided that we're probably going to miss Victoria's emergence from her chrysalis, so we've invited two new friends, Charles (Charlie) and King, to stay with us. Hopefully they'll begin pupating before we leave on our next adventure--if they do, then I'm pretty sure the timing will work out that we'll be able to see them as butterflies.

Posted by Scarlet Bluefield at 10:59 AM