Five years from now, I'll be the only one left in the canoe. All of my boys will be strung out behind me in their kayaks. Oh, maybe I'll be able to get Hubby to take pity on me and tow me instead of the other way around, but it's going to be awfully lonely in there. On the other hand, I will have plenty of room to spread out.
We went boating on the St. Croix River this weekend. We had various combinations of people in each boat at different times, but for most of the time ended up with Hubby and Logo trying to paddle the canoe (mostly Hubby because Logo was tired) into a headwind, while I held a screaming, and then finally, sleeping, Bubby, and Cody was being towed (also paddling, but sometimes resting, and usually just as I had to put down my paddle and the wind hit us again) in the kayak. Just as an aside, when Logo was Bubby's age, he had no problem sleeping in the front/bottom of the canoe, but Bubby will not. He screams for quite a while if I try to put him down, and I know that most of you have never tried to paddle a canoe while holding a sleeping kid--not easy. I kept thinking, "This is supposed to be fun?" But it really was fun, and it didn't kill us, so I guess it made us stronger. 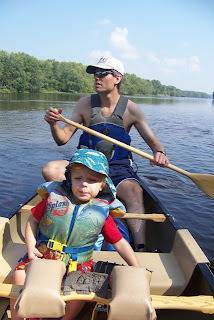 Here's a picture of Bubby and Hubby--doesn't Bubby look all grown up sitting in the middle seat all by himself? We discovered that our Tonka loader works great as a snack receptacle. 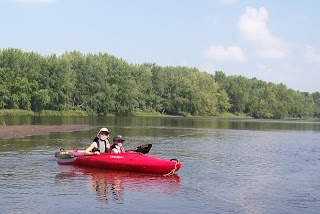 Here are Code-man and Logo in the kayak. Logo did some kayak paddling this trip, and he did a good job, for his first time (and for being only 6 years old). 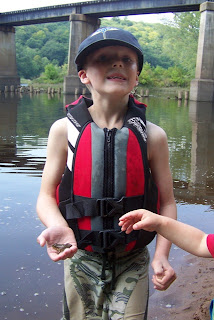 We stopped for lunch just past this turn-y railroad bridge (it doesn't turn anymore, but it does railroad). We had been there for, oh, about 2 minutes before we heard a train approaching. Logo spent some time playing with this frog. I don't understand that kid. Butterflies scare him, but he has absolutely no problem pursuing and capturing frogs and other slimy and/or creepy things.
Posted by Scarlet Bluefield at 9:13 AM