In case you missed it, someone called President Obama a liar in his address to the nation on Wednesday evening. I missed it. We had planned to watch Wipeout, but it was preempted for the president's speech, so the children decided to watch Qubo. The president is much too boring for them. I had to smile when I heard about it, not because I think it was a good idea for a member of congress to call our president a liar, but because it reminded me of my sister in law.

Once upon a time, we were visiting my brother and his family in Colorado. My parents must have been there, too, because the four of us, my brother, his wife, my husband, and me, were out and about on a date without children. There was a restaurant that we wanted to go to. I'm a little vague on the details, but I think that it kind of looked to us like people were waiting for tables, when we could see with our very own eyes that there were several open tables in the outdoor seating area. My sister in law was all set to demand that we be given one of the outside tables if they tried to make us wait. She was so geared up, that at first she didn't quite catch that yes, they were going to seat us right away. I guess you had to be there. Anyway, whenever I hear the phrase "you lie!" I think of my sister in law. Hmmmm...I wonder how she feels about that.
I must admit, when I heard that PO was going to be addressing my children Tuesday during school hours, my first response was, like many, I don't want that man spouting his socialist agenda to my children during school hours. It's not that I don't want my boys to hear him speak, but I want to be there to interpret his words with them. It's kind of like letting them watch a PG film--I need to be there. And I definitely consider PO to be a Parental Guidance kind of show. Not to mention that it appears, at least to me, that there is already a liberal bias present in our public schools. I distinctly remember being in 7th grade and thinking that communism sounded like a great idea, because that's how it was presented to me. And in theory, it is a great idea. In fact, that's how Jesus' followers lived. Everyone used their gifts to provide for the group and everyone shared what they had. In modern practice, we have seen how such a wonderful idea can and will be distorted into something horrible. And it will always fail, because we are humans: we are sinful, imperfect.
PO seems to be a very idealistic man. He appears to love this country and I believe that he believes that he's doing his best to do the right thing for our country. But I don't understand how he can think that socialism is the best way to run our nation. I don't understand how he can't see that all of his lofty plans and schemes will fail because there will always be people who are not willing to work within his systems. Not everyone is honorable. Not everyone is willing to work for the common good. In fact, most people are not willing to work for the common good if it means that they have to sacrifice. And there are always unintended consequences.
I do not, however, have a better solution, other than to let the market self-correct, which is also a great idea, in theory, but there are so many in our nation who fall between the cracks. Who can't afford health care, who live paycheck to paycheck, who sometimes need to decide between buying food or buying gas, who live in their cars. And while we could argue that for a good portion of them, it's their own darn fault, I really don't think it matters who is at fault. The fact is, there are people who are hurting and there are others who have more than they need. How can we ignore the fact that there are people dying in our country, in our world, because they do not have enough? See, I really am a socialist at heart; I'm not against redistribution of wealth, I just don't think that the government should be doing it.
Which brings me back to "you lie!" It is not my job to judge. Thank God, it's not my job to judge. It is my job to show Christ to the world, and the way I do that is to love. When someone needs help, I am called to help them, regardless of why they have found themselves in the position to need help. We all need help. We all fall short of God's plans for us. I choose to believe the best of everyone I meet, because God sees the best in each of us. 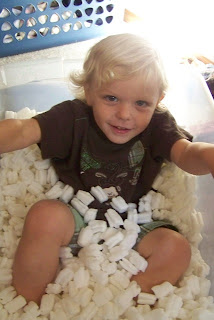 I know! That baby needs a haircut! We recently received a bunch of packing peanuts--I saved them and put them in a larger box for Bubby to play with. He is just too cute for words, sometimes.
Posted by Scarlet Bluefield at 9:21 AM