Whoops-a-daisy!  I was afraid of something like this: I went through my list of posts, and discovered not one, not two, but five unpublished drafts that were counted in my total.  So that wasn't my 400th post.  This isn't even my 400th post.  *Sigh*  But we won't let that stop us!
Anyway, I'm new at this giveaway stuff, so you'll have to forgive me for not specifying a deadline for the candle giveaway.  How about... Thursday, Dec. 16 at 8 a.m. CST?  That good for everybody?  Isn't this exciting?  Don't forget to leave your comment here (by the way, as of this writing there's only one qualifying comment, so you have an excellent chance of winning :-).
* * * * * * * * * *
So, if you know me at all, you know that I love to be outside.  It doesn't matter whether I'm having a horrible day or a terrific day, my day always gets better if I can spend some time outside.  Yes, even when it's 5 degrees outside.  And, surprisingly enough, even when it's 90 and humid (although I tend to retreat back to the indoors or at least jump in a lake faster on those sorts of days).
So after our grandma cracker building adventure, we bundled up and headed outside for some fun in the snow while we waited for the bus.  Just as an aside, I love my new snow bibs!  But then, I knew I would--my snow pants kept falling down, which was sooo not fun, and they were too long, too.  But the bibs are comfy cozy warm, and didn't fall down, or even threaten to.  Logo made a switch Wednesday, too, from bibs to pants,  and loves them almost as much as I love my bibs, because...and how can I put this politely?  It's easier for him to...use the restroom.  If you come to our house, watch out for yellow snow, and that's all I have to say about that.
Pal and Bubby had a sled race, too, which I videoed, so I don't have a pic, but Pal headed straight for me, and ended up sliding right through my legs!  You know how when you're seeing something on a screen, it slows down your reaction time (well, it does for me, anyway)?  I couldn't get out of the way, so I just made a bridge and hoped for the best.  We sure had a good laugh about that one! 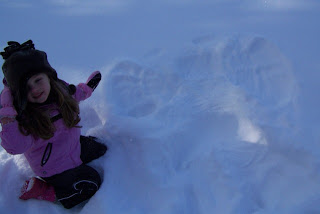 So what made this the best morning?  It all seems so ordinary--what was so special about it?  Well, I think for me, it was its very ordinary-ness that made it so special.  Once again, I had the opportunity to spend some time simply having fun with some of my very favorite people in the world. 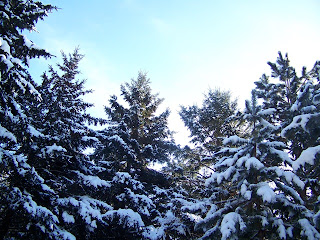 ﻿Ahhhh...this was my view, as I was lying on my back in the "boat" the kids made out of snow.  A tiny glimpse of heaven--what could be better?
Posted by Scarlet Bluefield at 9:00 AM