I just had the best morning...but I can't tell you about it, yet.  I was going to do just one big gingerbread post, but judging from my brother's rate of blogging already this month, now that he's tasted victory, he's competing in earnest.  And I can't let him win in the last month of the year, can I?  Got to keep up my momentum, such as it is.
So meet my new friends, Cookie and Gillian: 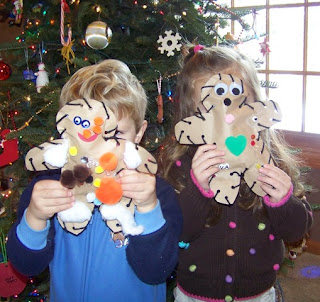 You're right: it's really Bubby and Pal with their new gingerbread friends in front of their faces.  We were channeling our inner Frugal Family Fun with this fun and inexpensive project.
First, I cut gingerbread shapes out of paper grocery bags, and then I held two shapes together, while the kids punched holes around the perimeter.  Next, we decorated our ginger boys, using craft supplies we already had on hand...and boy, did we decorate! 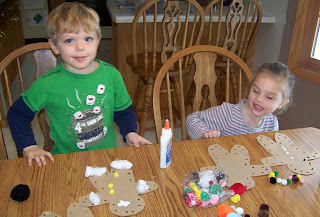 Elmer's school glue (I would use tacky glue if I were to do this project again) was used in copious amounts, as well as pom poms, cotton balls, sequins, googly eyes, beads, and foam shapes.
Next, I glued the shapes together, leaving an opening for stuffing.  I stuffed them with pages from the Fleet Farm ad (the best store ever), and glued the opening closed.  If I were to do this activity again, I think I would have done the gluing and stuffing before the punching and decorating. 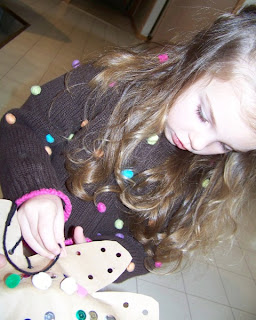 Next, the kids laced their gingerbread boys together and...
Voila!  Cookie and Gillian were born. 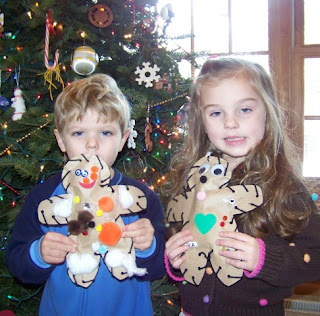 Bubby and Pal played with their new friends for the rest of the day, and discovered that ginger boys enjoy riding on dinosaurs and soaring through the air, among other fun things.﻿
Posted by Scarlet Bluefield at 1:18 PM