Today was Code-man's last Pinewood Derby as a Cub Scout.  In one week, he'll be crossing over (or whatever it is they do) to Boy Scouts.  To prepare, on Friday Bubby and I cooked up a storm...well, not quite a storm, but our house was smelling pretty yummy.  First, we made chocolate chip cookie bars.  Then, I decided to use up some cereal (that I got for free) that nobody in our house seems to like, and some marshmallows that had turned into a sticky glob because their bag didn't get closed tightly this summer, into Kashi Go Lean Crispy treats (shhh...don't tell anyone I used leftovers). 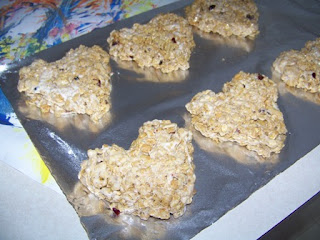 I decided to mold them into heart shapes, since love is in the air around here.  When the chocolate chip cookie bars came out of the oven, I put in some brownies in a jelly roll pan.  The jelly roll pan was so they'd be thin enough to cut into heart shapes with a cookie cutter--I'm a sucker for heart-shaped baked goodies. 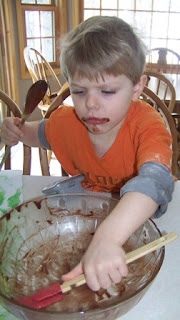 Bubby licked the bowls.  As you can see, he took his job quite seriously--he's even double-fisting to make sure the job gets done right.  I also cooked and seasoned 8 pounds of taco meat.  That was interesting.

The race was pretty exciting.  My boy Code-man took first in quite a few of his races (11 out of 14, my Hubby, who was playing announcer, tells me).  Logo came in second quite a bit, and first in his last race. 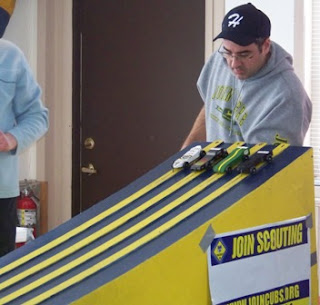 Here's the start of one race when they raced against each other--Code-man's car is the black one in lane 1, and Logo's is the green and yellow one with a G on the side in lane 2 (there were quite a few with that particular color scheme this year).  I think that's Code-man's best friend's car in lane 3.  I think in this race Code-man and Logo finished 1 and 2. 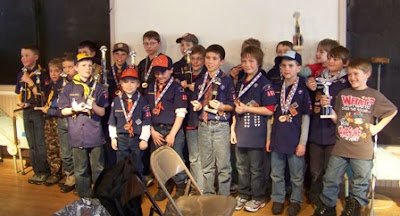 Here are all the boys milling around waiting for all of the flashes to stop.  They are very good at milling around, so good, in fact, that about 40 parents and grandparents wanted to each take multiple pictures of them doing it.  Logo is in the front row, the 4th boy from the left, with the yellow neckerchief, and Code-man is behind and to the right of him.
Logo got a 10th place trophy.  Yay, Logo!  Every boy in his den placed in the top 10, and the Wolves won 1st and 2nd place--they dominated!  Way to go, Wolves!  Code-man came in 3rd, plus his car was voted "most original design" by a panel of independent grandparents--not a bad way to end his Pinewood Derby career.  Code-man's 2nd year Webelos den also had 4 members in the top 10.  Way to go, Webelos! 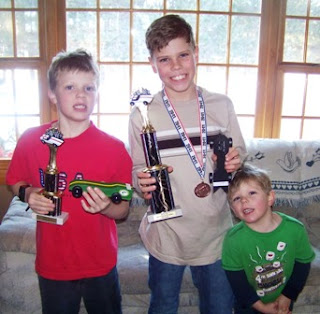