What is she going to do with all those juice lids?

Some time ago, I asked some of our extended family to save the metal lids for me from any frozen juice concentrate that they used, because I wanted to make a game using them.  I'm pretty sure they all thought I was nuts at the time, and that by now they've forgotten that I even made the request.  But finally, I had almost enough, and was inspired by this post by my crafting hero, Valerie, to start putting my game together.

The concept was to make a magnetic fishing game for Bubby, with letter "fish," but I was not sure how to get letters on my metal juice lids.  Permanent marker? Paint?  I don't have horrible handwriting, but I also don't have a particularly steady hand when it comes to stuff like this.  I had been contemplating attempting to stencil the letters on (which would have been a huge pain) when Valerie swooped in to save the day.  For her project, Valerie used felt letter stickers on round wooden disks to make faux sandpaper letters for her daughter. 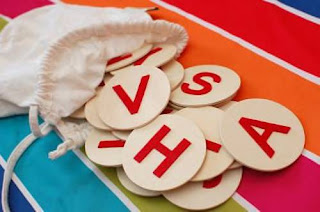 ﻿Ding (lightbulb lights up over my head)!  Stickers!  I decided to go with some glitter stickers that I found in the scrapbooking section of a department store, because they were the right size and included both upper and lower case letters and numbers.  Unfortunately, my choices were limited to silver or gold.  I went with gold, because while gold doesn't provide very much contrast with the silver of the lids, silver stickers would have been even more difficult to see...now that I think about it maybe I should have painted the lids first--one color for vowels, another color for consonants, and yet a third color for numbers...hmmm, maybe I'll have to remake this one (Hubby, do we have any metal primer?).  Anyway... 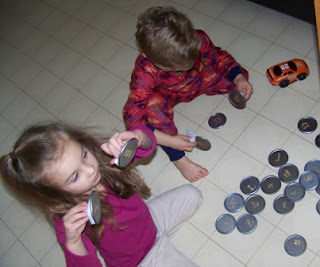 So it's really easy to just apply the stickers, once you've accumulated enough juice lids.  I put the upper case letter on one side of a lid, and the corresponding lower case letter on the other side.  Bubby and Pal helped, so they're not all perfectly centered, but it works.  For the numbers, I put the number on one side, and the same number of paint dots on the other side.  The idea is to work on letter and number recognition, and the texture of the glitter letters (similar to sandpaper), makes them fun to trace with a finger.
The next step was to make a fishing pole.  I just used a dowel we had hanging around (uh, you weren't planning on using that for anything, were you Hubby?), and used some yarn to tie on a doughnut-shaped magnet that I found at Fleet Farm (still the best store ever). 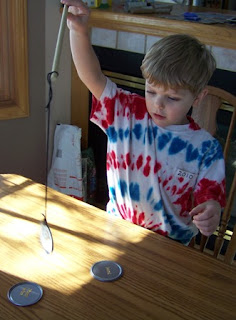 I've started by giving him just the letters in his name, until he can recognize those, and then I'll move on to adding more letters and numbers.  I'm thinking I may hide them in a sensory bin filled with oatmeal (if I can bear to part with some), or rice, or maybe birdseed because we have a ton of it, and the birds won't mind if we use it first before giving it to them; for him to find using the magnetic fishing pole--so much more sporting than just picking them off one by one from the floor.

Posted by Scarlet Bluefield at 6:34 PM