Year of the Dragon

Chinese New Year is celebrated for 15 days, beginning on the first day of the lunar new year, which this year fell on January 23.  I've never really celebrated Chinese New Year, but when I was searching for January crafts, Chinese New Year came up, and I thought it would be fun to learn about another culture, plus I welcomed the chance to get away from snowy projects and do something different.  The ancient Chinese named each year for an animal, twelve in all, and supposedly people develop the character traits of the animal whose year in which they were born.  This year is the year of the dragon.

So on Tuesday, we made Chinese Dragon Lanterns, using this template from First-School (click for instructions).  Or, I should say, Pal made a lantern.  Roger colored his dragon, but didn't want to cut it so he just has a dragon. 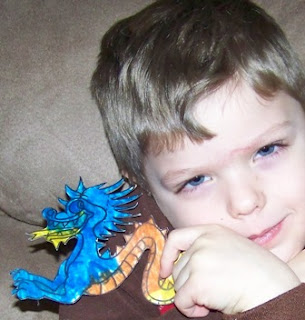 Pal's lantern turned out pretty cute, but unfortunately, I didn't get a picture.  We learned that the Lantern Festival is celebrated on the last day of Chinese New Year, which this year is February 6 (so you still have time to make your lanterns for the big day :)

On Thursday we read Dragon Dance: A Chinese New Year Lift-the-Flap Book by Joan Holub, illustrated by Benrei Huang.  It's a cute book, with colorful illustrations and a nice brief explanation and overview of Chinese New Year, just perfect for preschool attention spans.  The fact that it's lift-the-flap is an added bonus.

Another bonus is the instructions for a craft printed on the inside back cover of the book--a dragon puppet!  So, of course we had to make one.  It was cute and very easy to make, using a paper bag, some construction paper, markers, and glue. 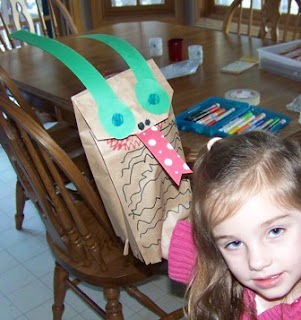 I had another activity planned that we didn't quite get to this week, but hey, we still have another week, right?  This is my kind of holiday :)  Anyway, I went here, found the kids' Chinese names, and printed them out, along with their English names.  Fun, right?  I plan to cut them out and frame them with red paper (because red connotes good luck and fortune in Chinese culture), and then mount them to tag board (aka cereal box cardboard).  I'll probably have the kids punch two holes in the top, and thread a ribbon through for hanging.  I'm toying with the idea of incorporating their Chinese Zodiac animal in there somewhere as well--working on it...
In celebration of Chinese New Year, Panda Express sent me a bunch of coupons good for a free kids meal--many more that we will be able to use.  If you'd like one (or some), just send me a message via my contact form.
I've linked this project up to a story + art = a great stART﻿ over at A Mommy's Adventures.

Posted by Scarlet Bluefield at 10:52 AM