Well, cross one off our to-do list.  On Tuesday, we visited the waterfall.  You know, the one where I always forget how steep that hill is.  We took the short-cut by Pooh's House and that darn geocache (which we can't seem to not find now) this time, so I wasn't brutally reminded of the steepness.  Anyhoo...

It has been raining here, seemingly non-stop, for the past 2 weeks.  Maybe even longer.  It just blows my mind that a month ago we were experiencing a drought.  Now we've got wide-scale flooding in the region.  The rain has been a quite a nuisance, wrecking havoc with our carefully laid plans.

On Tuesday, we were supposed to go to the library, followed by the 11-6 beach, but the day dawned dismal and gray, and we decided the beach might not be the best idea.  Our library plans were foiled by Tuesday.  I had forgotten that they open late on Tuesday.  Dejected, we headed home for lunch and to regroup, and by the time we were finished with lunch and chores, the sun was shining and the air was ripe with humidity.

In an attempt to redeem the situation, off we headed to the waterfall at the nearby state park.
﻿ 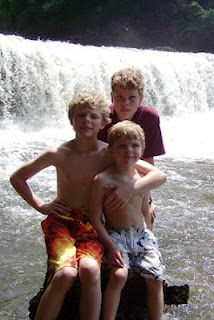 There was wading and picture taking.  (Maaooom!) 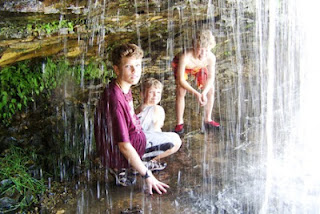 Someday, the Mama will work up the courage to lead an expedition all the way across the river behind the waterfall.  Not this day, though. 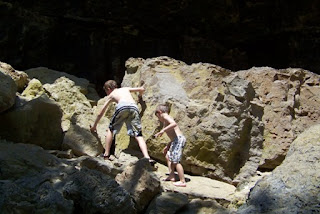 There was rock climbing and cave exploring. 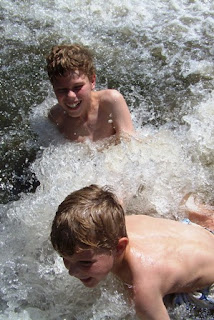 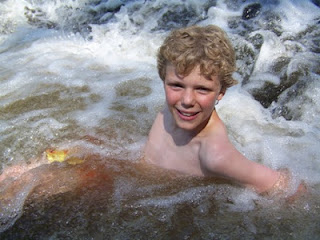 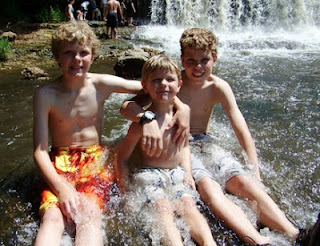 And good thing, too, because today, the day we had planned our hike to the waterfall, the rain fell...  A different sort of waterfall, altogether.


Because I know you want to know, here's how we're doing on our list:

Posted by Scarlet Bluefield at 9:42 PM