Bragging on my other kid :)

Once again, my friends, you know where the big red X is if you don't want to hear me bragging on my kid.  But you should really stick around, 'cause he's pretty awesome--you're gonna want to hear this :)
Our oldest, AKD, played travel soccer for the first time this year.  He's been playing soccer in a rec league since he was 7, but the travel team is another world as far as the level of skill goes. 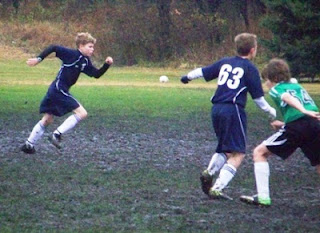 AKD has always been one of the two or three best players on his rec team, and it was so great for him to get to play with boys who are better than him, to learn from them.  His coach was pretty awesome, too, and taught him so much about position and technique.  It's a whole different game when the whole team is good, rather than just a few.
The boys went 6-0 in the regular season, with only 1 goal scored against them, earning the championship title in their division.  They were a sure thing to win a spot in the state tournament this past weekend. 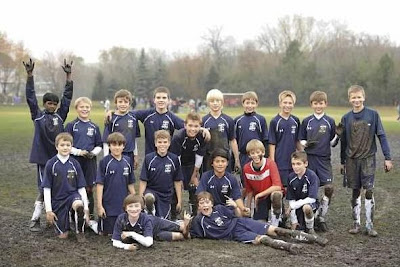 The conditions were horrible.  Could have been worse, but not by much.  It was cold, rainy, and the field was just a mud pit.  The boys won their bracket easily, beating their opponents, in the muddy skating rink the association tried to convince us was a soccer field, 3-0 and 2-0.  The league uses a point system to rank the teams and our boys earned a score of 19 out of a possible 20--none of the other teams in either bracket even came close. 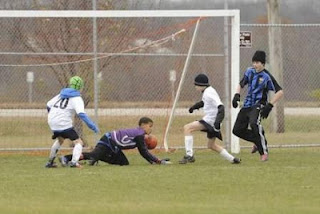 Plain and simple, our boys were outplayed in their final game.  It was heartbreaking, because I am sure, under normal circumstances, they could have beat that team.  I'm sure they were tired from having played 2 previous games, including one that morning, in the mud (the other team played their 2 previous games the day before, and on a field in good condition).  Oh, but they played their hearts out, and we parents were and are so proud of them! 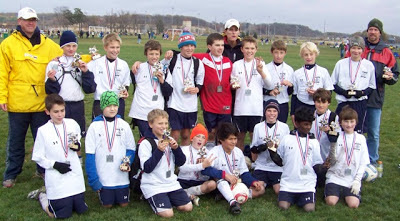 AKD improved so much over the course of this season and gained confidence in areas of his life other than soccer as well.  I love that he always does his best for the team (even when he's tired and cold and hurting) and doesn't seek the glory for himself.  I am so proud of my boy, and can't wait to see what unfolds for him in the next few years and beyond. 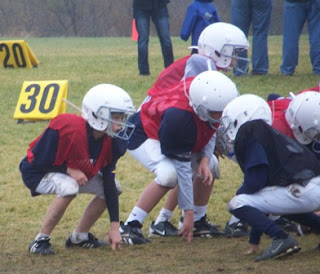 Just look at that expression of determination on his face--I love it!
Posted by Scarlet Bluefield at 10:56 AM