The little girls are 9 weeks old. 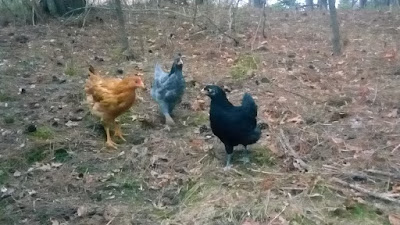 They are living out in the coop full time, and they get themselves from their safe spot in the hen house out to their safe spot in the run in the morning, and back to the hen house at night.  The bigs still chase them, especially Toasty, but more and more it seems like the bigs only chase when the littles are actually in their way, as opposed to whenever they catch sight of a chick.  This is progress in the right direction.

Koko loves to perch.  Here she was on the back of my chair.  The other night she flew up to Hubby's shoulder and made an attempt at his head. 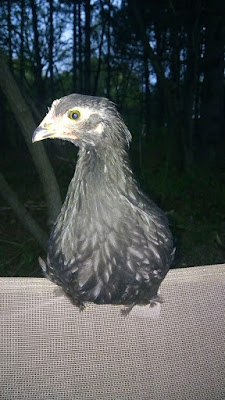 Koko, more than the others, likes to come out of the safe spot in the run for a few seconds before darting back inside.  Koko likes to be with her sisters, and starts distressed peeping when they're separated for whatever reason.

Hazel is Bubby's lap chicken, whom he likes to stroke menacingly, like this guy:
and she's still the biggest of the littles.  Toasty's voice is changing, or I should say, has changed. She's honking now instead of peeping.  Her beak is OK--just the little tip of the top chipped off, and it'll grow back quickly. 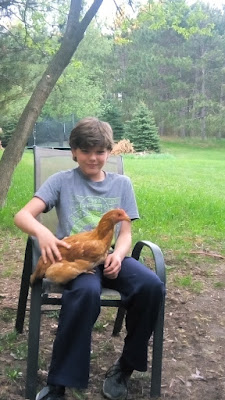 Hazel is Toasty's favorite to chase.  I can't decide whether it's because she's the biggest, and therefore the most "threatening," or because she looks the most like Toasty, or if it's just because Hazel is the chick most often in Toasty's way.

And here's Indigo.  She's so pretty with the dark lacing on her feathers.  Sorry about the weird lighting--Indigo does not like to pose--she's almost constantly moving (which is a common chicken trait). 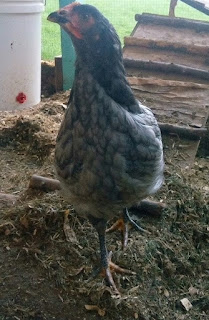 As you can see, Indigo is developing a comb and wattles--Hazel is, too.  They will likely be about the same size as the big girls at 16 weeks of age, and could start laying in about 7 weeks.  That's kind of crazy to think about!

I do not, as yet, have a plan in place for full chicken integration.  Obviously, there will come a point in time when the littles will be so big that the openings to their safe place will have to be big enough that the bigs (or at least Esther) will be able to get inside, rendering the safe place no longer safe.  Right now, we're taking it one day at a time.  I think we'll probably take the partition in the hen house down first, since all the girls do in there is sleep and lay eggs.  How much drama could there be in there?  We'll see.

In the meantime, everybody's growing and thriving, and I'm hoping that in about 2 months, they will all get along.
Posted by Scarlet Bluefield at 6:00 AM