The other day I was talking to a friend, and she was telling me how sometimes her depression makes it feel impossible to get up and do anything or go anywhere.  I shared with her that I understand, that I don't hold it against her or think any less of her.  I also shared that I literally have to give myself a pep talk in order to get myself out of the house most days.  Even if I'm going to be with people I love in a place that I love.

She was kind of incredulous.  She said, "it sure doesn't seem like it."  And she's right.  Most people think I'm normal (whatever that means), if a little flaky, because of my tendency to cancel, or not accept in the first place, social engagements.  It's not something I usually bring up in casual conversation.  Because I never have casual conversations.  Because I'm socially anxious.  Which means any conversation is a high anxiety situation.  And most people think my friend is normal, too.  No one knows what goes on in our brains.

We don't know what anyone else is struggling with, unless they tell us.  And even then, we don't really know the full extent of the struggle.  Most of my friends don't realize that I have to do battle with the tyrant in my head before I can do anything that involves other people.  Battling tyrants is exhausting, and sometimes the anxiety wins.


“I have told you these things,

I have another friend whose oldest child was just accepted into a residential program to help him or her learn to cope with their OCD, anxiety, and depression.  This is serious business, affecting every aspect of this family's lives, and yet the image this family projects to the outside world is that of a normal family.  If you're not in the know, you wouldn't know.


so that in me you may have peace.

Yet another friend is being verbally abused by her husband.  He hasn't hurt her physically.  Yet.  But again, unless she specifically told you, there would be no way you could know, because from the outside, they look like a normal couple.


In this world you will have trouble.

My point here is twofold.  First, don't compare someone else's highlight reel to your bloopers.  Don't assume that just because someone you know appears to have it all together, to be so much more than you, that they actually are.  They're not.  Everybody has struggles.


But take heart! I have overcome the world.”

And second, exercise compassion.  When someone is flaky or in a bad mood or easily irritated or seems irrational, there could be something going on that you know nothing about.  And as much as that someone seeks to hide it, it tends to come out in sneaky ways.  I'm not saying you need to let yourself be abused--it's OK to set healthy boundaries, especially around toxic people.  I'm just saying, be aware, give grace.  They are sure to be fighting battles of which you know nothing. 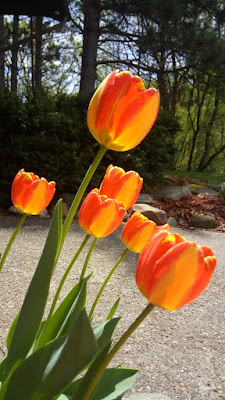 Posted by Scarlet Bluefield at 6:00 AM

Email ThisBlogThis!Share to TwitterShare to FacebookShare to Pinterest
Labels: inspiration