Hey everybody.  Just checking in to let you know what's been happening around here.

He'll have to send me a picture on his first day next year.

During his high school career, AKD took so many extra classes that there was actually only one class he needed to pass this semester in order to graduate.  That seems kind of crazy to me, that he had enough time to take that many extra classes.

MC passed his Driver's Education theory class.  He worked really hard studying for the test, and we're so proud of him.  The next step is Behind the Wheel, which will happen in November.  Pray for us.  And our vehicles.

Bubby participated in his grade's track & field day on Tuesday.  He ran 40 and 60 meters, and was the anchor for his class 4 x 100 m relay.  He also did running long jump and standing long jump.  That morning he was speculating on his chances of getting a ribbon.  I told him to just do his best, and that doing one's best is definitely something to be proud of, regardless of ribbons. 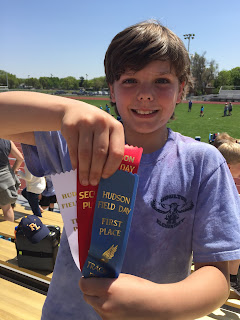 He had such a great time, and he did his best.  He said that he was most proud of the 3rd place finish (out of about 22 teams) in the class relay, because they worked together to achieve it.  I loved the way the kids all cheered for each other and encouraged one another.

It's definitely feeling summer-like around here.  We pretty much had 3 days of spring between winter and summer.  Crazy weather.  For mama's day, the boys expanded my garden, and yesterday I picked up the sphagnum moss and vermiculite to fill the new raised bed.  The third ingredient is compost, which I made myself (I'm hoping I have enough)!  I'm hoping to get the garden planted by the end of May.  It's a little late, but considering how cold it was for so long, it's probably right on schedule.

Now, of course, I need to figure out what to plant.  I was planning on just doing tomatoes and a couple of jalapeno plants, because I only had one bed to work with (the other bed has strawberries in it), but now I have double the space.  I'm considering just filling it with tomatoes.  Tomatoes are something that I can preserve easily, and I will definitely use.  Any suggestions?

Hazel (the 10 week old chick) is just about the same size as Esther (the over a year old hen) now, so I'm not sure how much longer the chick safe space will be safe.  If I leave the door open wide enough for Hazel to come and go, Esther can also come and go, and in fact, did this morning.  When I went out there Esther was in the safe space, eating the chicks' food, and the chicks were all cowering in the far corner.  Integration will be coming soon, ready or not.

Esther is still the hen who is most likely to peck at the littles.  Toasty still pecks at them when she feels like they're encroaching on her resources (food or space), but today I saw Rocky let the chicks eat from the same bowl as her (I place the bowl near one of the openings of the safe space so that both the bigs and littles can reach it) without threatening them.  That's so encouraging.  Hopefully the others will follow suit soon.

Speaking of safe spaces, I took the fake eggs out of the nest box last night to wash them, and I didn't put them back, because I figured that by now, the girls know where the eggs are supposed to go.  Well, when I was out this morning checking on the girls, there were no eggs in the nest box.  I figured Toasty must be taking a break.  I mean, she's an egg laying machine, but even machines need maintenance from time to time.

When I went out in the afternoon and there were still no eggs, I wondered if the girls had decided to lay somewhere else today, so I looked all around the run and in the hen house.  Still no eggs.  Toasty was acting agitated--she was pacing and looking around, then she went into the hen house and came back out.  I wondered if she needed to lay but didn't see the egg so didn't know where to go, so I put a fake egg in the nest box and put Toasty into the hen house, but she came right back out.  I put her back in, thinking maybe she hadn't seen the egg, and that's when I noticed two eggs in the chick's safe space.  That's right: both Toasty and Esther laid eggs in an area that they weren't supposed to be able to get to.  Silly chickens.

And that's it for now.  If I don't see you before then, have a great weekend :)
Posted by Scarlet Bluefield at 3:34 PM