What a busy weekend we've had! Friday was good, because the kids didn't have school (that's why they call it good Friday). We went to the Lent Event at our church and had a great time. Cody and Logan made several crafts and collected jelly bellies at each station, while Caleb played with trucks, and stared at the jelly beans suspiciously. The thing everyone looks forward to at Lent Event is the egg hunt at the end. The boys each found their 4 eggs, and then delighted in opening them and eating the candy. Caleb found one of two special prize eggs, and won an Easter basket full of goodies.
Saturday was Logan's 6th birthday. Yikes--he needs two hands now to show how old he is. We started with a construction themed party with 5 of Logan's friends (two others couldn't make it). Have you ever tried to herd 5 and 6 year olds? Let's just say we now have a new dimension in our respect for Logan's Kindergarten teacher. 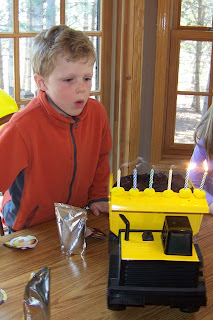 After the party someone convinced Logan that he should try riding his bike without training wheels. So he did. 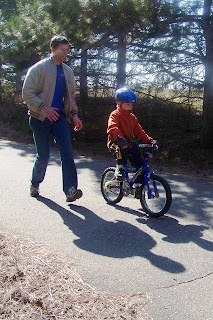 Later that night we headed to St. Paul to watch a professional lacrosse game: it was the Minnesota Swarm versus the Portland Lumberjacks. 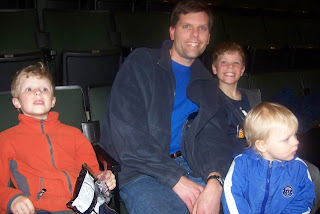 The Swarm lost, but we had a lot of fun at the game. There's a lot of scoring in lacrosse, and the game is very fast paced--I found myself getting tired just watching the players run back and forth. In addition to the game itself, I found the announcer quite amusing, and they had a guy they called the Toyota professor (so called, because evidently Toyota sponsors the team), who, from time to time, would explain a play or one of the refs' calls, which really helped us to understand what was going on. 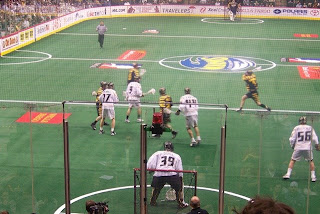 Sunday, we headed to church for breakfast, followed by Worship. When we returned home, we discovered that the Easter bunny had paid us a visit, leaving some candy-filled eggs for Caleb, and a set of clues for Logan and Cody, leading to a treasure. 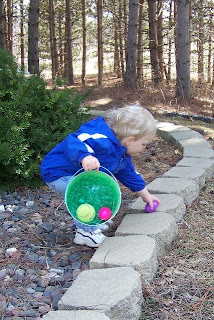 This was Caleb's second egg hunt (the first being on Friday, when his brother Logan helpfully located, picked-up, and placed the four eggs into Caleb's bag), and he wasn't quite sure what to do, but he caught on quickly. 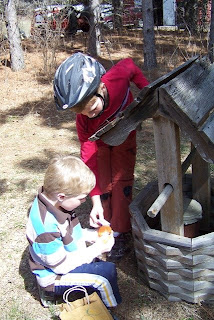 It was fun to see our two oldest children working together to solve the clues. E.B. did a good job hiding the clues :-)
Now, my three oldest boys are canoeing down the river (where, while we were dropping them off, we saw a bald eagle, a loon, and a crane, along with 6 little fishies that someone had caught), the little one is sleeping, and I plan on joining him as soon as I'm done here. We'll go pick up the river riders around 5, have dinner, watch Amazing Race, and then probably collapse into bed after this very busy and fun weekend.
Posted by Scarlet Bluefield at 3:30 PM