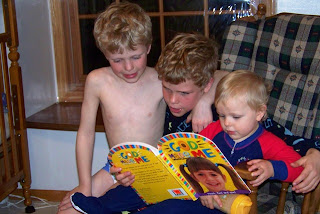 Here's a picture of Code-man reading to his brothers at bedtime. Awwww! How special.

I am finally almost done with a project I've been working on for someone I love--now I'm just waiting for a detergent bottle to be emptied so I can finish (intriguing, eh? Wouldn't you like to know what it is and who it's for?). I've enjoyed doing it, but it just feels like it's taken forever, and actually, thinking about it, I think it's been almost a year since I got the materials. Isn't that just the way? Projects take at least twice as long as you think they're going to...

On Saturday, Code-man raked a path through our front woods to make a bike path, because, you see, when you "get some air" (jump) the pine needles are quite slippery to land on. He also did some digging on one of the jumps and eliminated another one so that he could set up for the big jump. He didn't want me taking his picture jumping, so he went slow whenever he saw the camera, and I'm just not talented, or sneaky, enough to hide the camera until he's already committed to the jump. 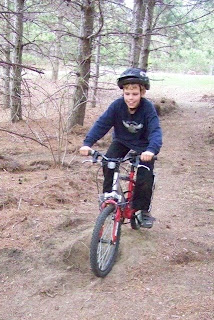 During the course of the day, Cody decided to get out the go-cart that Grandpa made for the boys and try it in the woods. He kept going slow, though, keeping his feet on the ground, even though I told him that with the resistance from the dirt and the shallow slope he wouldn't get going nearly as fast as on the driveway. We really need to put some breaks on that thing. 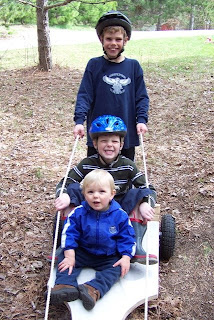 Isn't this a great picture? They're all looking at me, and mostly smiling.

Code-man's friend Derek came over, and after trying the jumps repeatedly, they decided that they wanted to dig. I told them they were welcome to dig in the garden area, as long as they filled the hole in when they were done, and as long as they promised not to do that after we actually plant stuff in there. They ended up digging two holes, which were quite deep, almost to Logo's waist, and definitely at least as deep as the retaining wall. 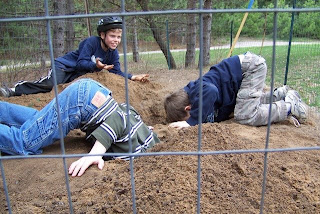 Bubby decided to start cleaning up the front front yard, where the lake had been. This year there are quite a few sticks left over from the flooding. I don't think Caleb quite understood the concept, though, because he would pick up a stick, and then transport it to another area where he would drop it off and pick up another. Such a cutie-pie! 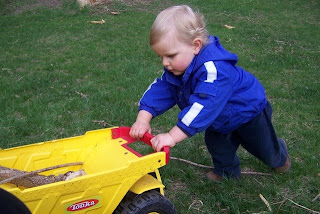 Posted by Scarlet Bluefield at 9:05 AM