So, the computer has migrated up the stairs due to some unscheduled maintenance downstairs, and now it's much easier to do my summer-time blogging. I was very surprised to see these little guys out in the garden on Friday. Yup, we have green beans--I'm so excited! Speaking of little guys in the garden, Victoria (the monarch caterpillar) has come indoors to hang out with me, at least until we go on our next adventure--if she hasn't gone into her chrysalis by then, I'll put her back outside. I think Rex must have already gone off somewhere to begin his metamorphosis, since he's not on the milkweed plants anymore.

Code-man has become quite the social butterfly (pun intended--I love puns). On Thursday he had a friend spend the night here, then he spent Saturday afternoon until well past bedtime at a different friend's house, and now he's at the first friend's house spending the night. Derek's dad joked on Friday, "when are we going to sign the adoption papers?" but it's really more like a custody agreement, the negotiations we go through...well, Derek has summer school at 10, but Code-man and Logo have VBS at 9, then swim lessons at 1, so I'll drop Derek off at 8:15 and then pick him up again at 2:30...

So anyway, today (Sunday), while Code-man was gone, Sawblock and Logo worked on the tree fort a little bit. Bubby helped, too. 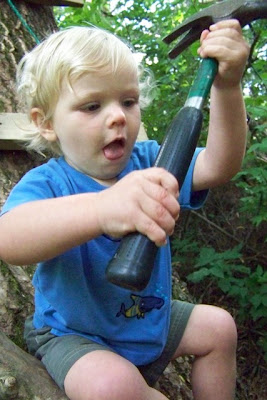 Gotta love that tongue hangin' out! 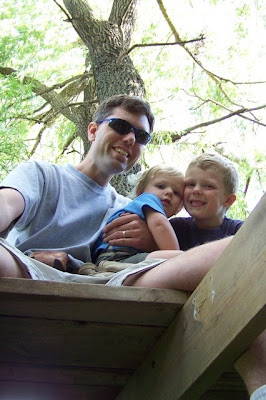 Posted by Scarlet Bluefield at 9:06 PM