Hey y'all.  Things are happening in the garden, so I thought I'd post another update.

Most exciting, to me anyway, are the grape tomatoes.  There are three that are just about ready for harvest.  Mmmm.  So good. 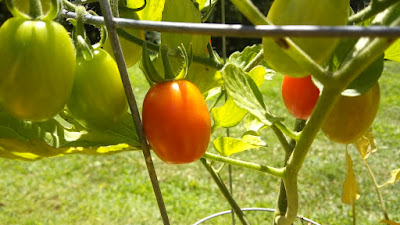 I also noticed that two of my tomatoes turned orange overnight.  They'll be perfect for BLT night next week. 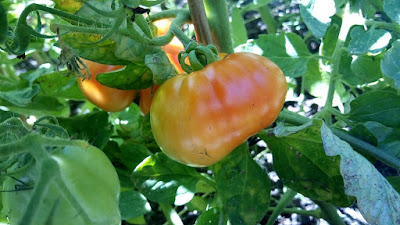 The Brussels sprouts are finally forming, although I've already seen bugs on them, so I'm not sure if we'll actually be able to enjoy them or not.  I'm sorta tempted to pull at least some of the plants out, because they're crowding both the cantaloupe and the jalapeno peppers. 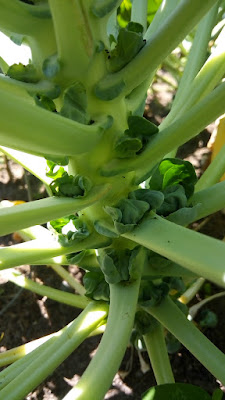 Speaking of jalapeno peppers, I'm not sure how to tell when they're ready for picking.  We have about 5 that are close, but I don't want to pick them too early.  Or too late.  I guess I have some googling to do.  It would be really nice if I had enough tomatoes and enough jalapenos for a batch of salsa, ready at the same time. 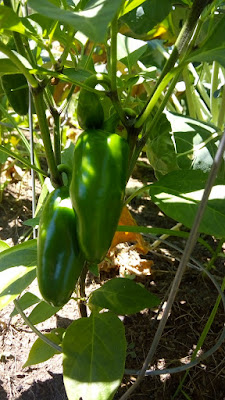 I've seen a couple of small cantaloupes on the vines, which are going everywhere.  The Brussels sprouts are shadowing the plants where they're rooted, so the vines are seeking out sunshine elsewhere.  One of them even climbed one of the sprout plants.

We have both June bearing and ever-bearing strawberries in our garden, and the ever-bearers are working on their second wave of strawberries. 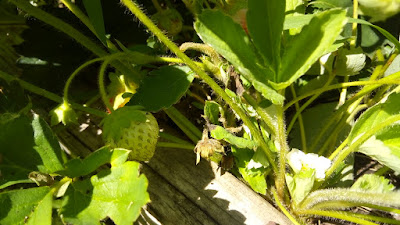 As far as I know, the potatoes are doing OK.  Kind of hard to tell, since the tubers form underground.  It's an exercise in faith.  The green parts, that are above ground, are doing well, although they're a bit leggier than I think potato plants ought to be, and something has been eating a few leaves here and there.

The basil is doing really well.  I keep cutting it back because it's getting too big, and then three days later it's back, and even bigger than when I cut it.  I dried some in the oven, which I will use to make spaghetti sauce next week, and today I'll make pesto to use for the chicken basil burgers.  I have the perfect little mason jar in which to store the extra.  If there is any extra.

Last week I told a friend that next year I need to plant sugar snap peas, or some other early harvest crop, because I am not good at waiting for things to grow in the garden.  If I can have that not-quite-instant, but certainly pretty fast, gratification of harvesting something early, that will go a long way to keeping me focused and motivated.

Of course, it won't hurt to get the garden planted a little earlier, either.

That's it for now.
Posted by Scarlet Bluefield at 6:30 AM