To read my first post about our Memorial weekend, click here.
So, on Sunday, we dropped Sawblock and Code-man off to do some kayaking. 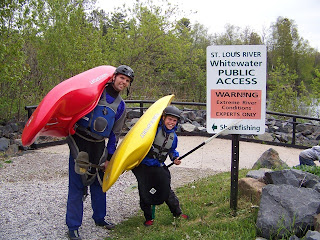 Just in case you can't read the sign, the orange portion says,

"WARNING
Extreme River
Conditions
EXPERTS ONLY"
In the background of this photo, I was attempting to show just how unextreme the river looked at this point, but I don't think I quite succeeded.

We saw this fearsome beast at the put in before the guys set off. 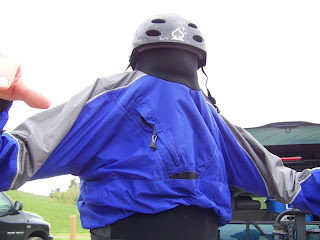 Can you see how menacingly he's raising his hands?  Whew!  That was a close call.

The rest of us decided to head to the Lake Superior Zoo to check out some other fearsome creatures, these ones located safely behind fences or glass. 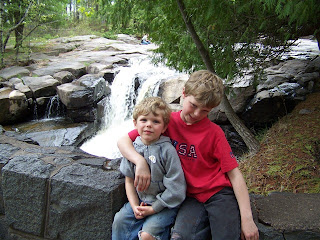 I have to say this zoo was scenically the most beautiful zoo I've ever been to.  There was a gorgeous river running through the grounds (really, it was, even though you can't see much of it in this photo), and it was just a very nice place to be. 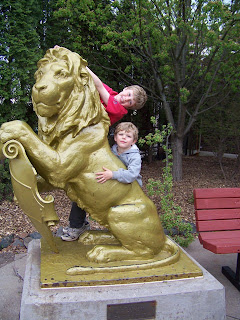 There were real creatures at the zoo as well, it's just that it was not as easy to photograph my children with, say, the polar bear, or the tiger.  As I said previously, they were all behind glass... or at least fences. 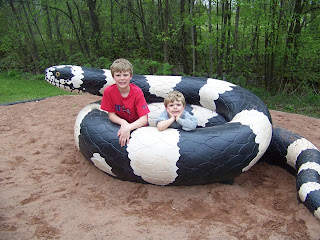 And what were those other guys doing during this time?  Well, this (click for the video), among other amazing kayak-y feats.  They met up with a group of 3 other kayakers who were systematically kayaking some sub-set of rivers (I forget now what Hubby told me they were doing) with video cameras.
﻿ 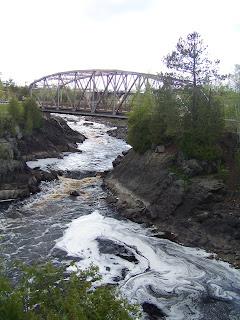 Apparently, my husband and son kayaked this section of the river.  As you can see from the lack of kayaks in this picture, I missed it.  It looks a bit more extreme here. 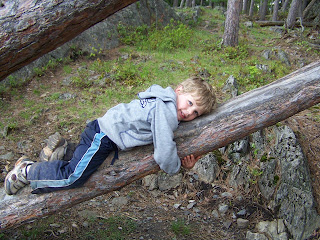 But while we were waiting in vain for Hubby and Code-man to appear in their kayaks, Bubby decided to become a tree-hugger (doesn't he look tall in this picture?), and MC did some more climbing--you can't really tell from the picture, but he was breath-takingly high, and this was actually taken when he was already on his way down. 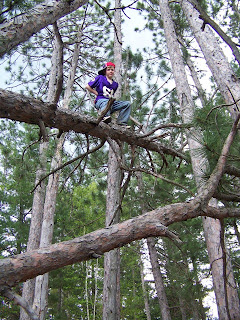 So, I opened this set of posts saying that our camping trip was rainy and cold, and based on these pictures, you're probably wanting to call me a liar at this point: maybe it looks cold, but it certainly doesn't look rainy.  Believe me, it was both: we made a few mad dashes to stow equipment, and even had hail on Saturday evening.  But the rain managed to fall mostly during our rest times and breaks or while we were away.  The only activity we had planned that we didn't get to do was riding on the Timber Twister, which is an alpine roller coaster.  Next time.
So  yes, we had a great time.
Don't forget to enter my poetry contest.  To enter, click here to leave an original poem in the comments.
Posted by Scarlet Bluefield at 3:55 PM