You guys! You have GOT to try this! I've been wanting to make bracelets using shrinky dinks with my Camp Scarlet kids forever, but haven't been able to bring myself to actually buy shrinky dinks--that stuff is expensive. 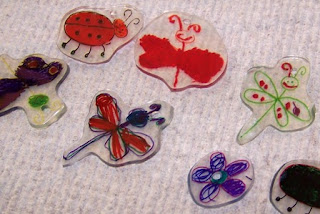 When I found out that I could make my own shrinky dinks for FREE using materials from my recycling bin, you can bet I spent the next several months obsessing about finding number 6 plastic (polystyrene).

When I mentioned to my sis the other day, that this was the day she...well, let's just say that she was unable to match my enthusiasm for the project.  She's only 6 years younger than me, but apparently the shrinky dink craze had diminished significantly by the time she was old enough for them.

Well, whether you got in on the shrinky dink revolution as a kid or not, this is a not-to-be-missed experience, combining science, art, and that undeniable "wow" factor.  Are you ready?  Grab your number 6 plastic and let's get started!

The polystyrene that you're looking for is the clear, non-expanded kind.  I found it in take-out containers (not the Styrofoam ones, the clear plastic ones), tops of some bakery goods, a plastic tray from a package of cookies, tops of disposable aluminum baking pans, and disposable clear plastic plates.  Once you know what you're looking for, you'll start seeing it everywhere.  Just look for the recycling symbol with a 6 in the middle.

One of the grocery stores near us has a salad bar, allowing one to fill a container with salad fixings, and charging by the pound.  Those containers?  #6 PS.  The cashier did look at me a little funny when I walked up with just a stack of clamshell containers with nothing in them, but she got over it.  I also made Hubby save the take-out containers from a dinner out on our spring break trip and haul them, first with us to visit the in-laws, and then all the way back to our house, a round trip of around 850 miles.  He got over it, too. 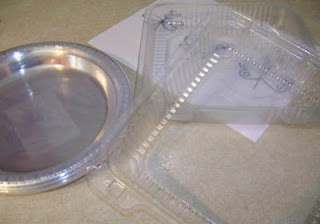 Once you've got your plastic, cut it so that you have a flat sheet to work with.  Draw on the plastic using permanent markers (we used Sharpies).  You can either draw freehand, or place the image you want to draw under the plastic and trace.  We found some cute line-drawing bugs to trace. 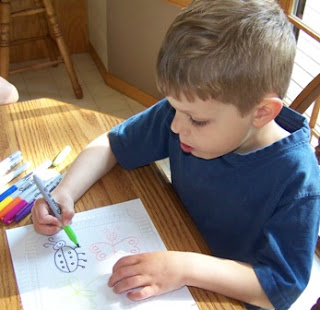 Cut out the shapes, leaving a bit of a border around the colored part, and rounding the corners.  If you want a hole in your finished shrinky dink, now is the time to punch it.

Place the shapes, ink side up, onto a foil-lined baking tray, and place in a 350* oven until they've stopped moving (if that sounds a little strange, just try it, you'll see what I mean). At this point, you (and the children) need to be glued to the oven door watching the dinks through the window--it's very entertaining.  They will shrink to about 1/3 of their original size and be 5 to 6 times thicker.  Ours took about 3 minutes. 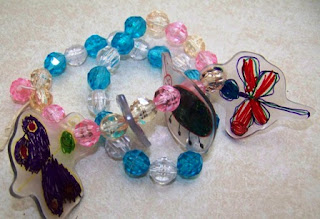 Now you can do whatever you want with them.  The Camp Scarlet Crew decided that necklaces would be better than bracelets, but you could also attach them to a keychain, make them into a zipper pull, make a luggage tag, a guitar pick, or whatever else you can think of! 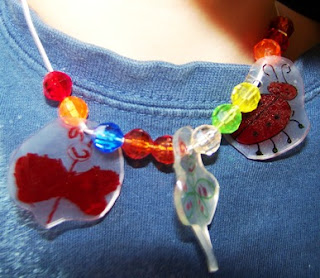 To read more about the science of shrinky dinks, click here.  Have fun, my friends!﻿
Posted by Scarlet Bluefield at 1:30 PM

Email ThisBlogThis!Share to TwitterShare to FacebookShare to Pinterest
Labels: BUGS