With school back in session, fall sports are in full swing as well. 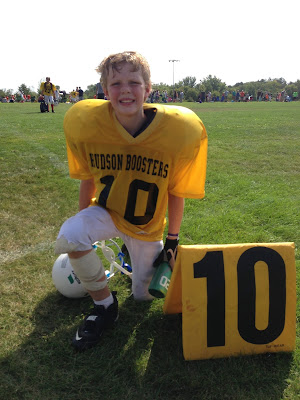 He just loves it!  His mama holds her breath and cringes whenever her baby comes into contact with some other mama's baby on the field (we've already had injuries on the team, including one boy whose kneecap is shattered--yikes!), but MC is doing terrific.  It's a big time commitment, but the time and cringing is definitely worth the confidence and camaraderie MC is developing on the field.  The Honey Badgers are currently undefeated.

Bubby is playing soccer for the first time and loves it, which is terrific, because he didn't think he would.  He is particularly good on defense, and scored his team's only goal last week, to tie the game. 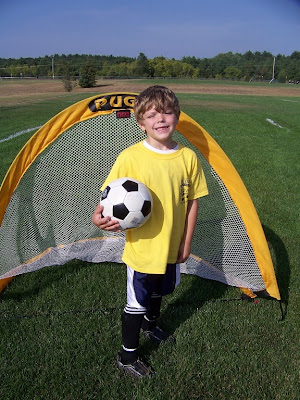 Week 1, they were the Golden Treasures; Week 2, the Golden Scorpions
Kind of nice that both our kids are wearing yellow, since they have games on the same day.  We can support our kids by wearing their team colors and not have to change.
AKD signed up to play soccer this fall, but there weren't enough boys for a U14 travel team.  Which is a bummer, but is actually a blessing because his games would have been on Saturdays and Sundays, and who knows how often he would have had to practice.  Hubby and I have both commented in recent weeks that we're not sure how we would have managed being in 3 places at once for two months.

The other day I was idly wondering if AKD would want to try again next fall.  And that's when I realized: next year, he can try out for the high school team.  Yikes!  High School!
Posted by Scarlet Bluefield at 10:55 AM