Curious Occurrences in the Coop

Well, y'all, I'm really not sure what to make of this.

On Monday, when I went out to check on the girls, I found this: 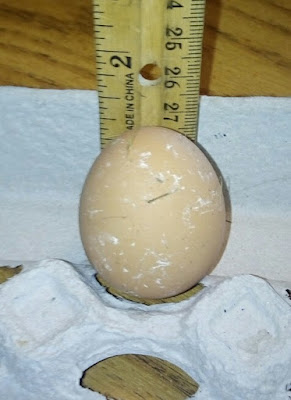 just sitting in the run near the grit dispensers.  I was so excited, although a bit disappointed that it wasn't white or cream. I congratulated Hazel on laying her first egg, but admonished her to lay the next one in a nest box.

Later that evening, the girls were out eating bugs, and I decided to do a little poop scooping in the hen house.  I opened the people door and noticed a little depression in the bedding in the back left corner.  That's where I found this: 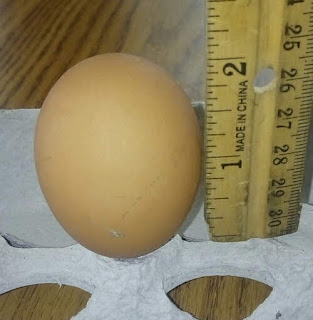 What?!  Had Hazel laid an egg previously and I just hadn't noticed it (entirely possible, since I don't open the people door every day)?  Had Indigo laid one of the eggs?  Or both?  Had Toasty decided she'd had enough of the nest box and decided to make her own nest (it's a bit smaller than hers usually are, but approximately the right color)?

I collected the eggs, and admonished the girls, once again, to please lay their eggs in the nest box.  It's 6 feet from the people door to the back of the hen house, and I can't reach that far without assistance of some sort.

On Tuesday, Bubby and I returned from an outing and found this in the nest box: 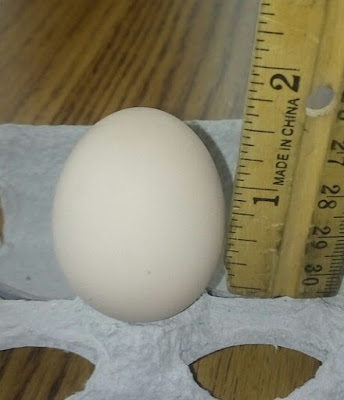 and this in the hen house, this time in a little nest-like depression in the back right corner.: 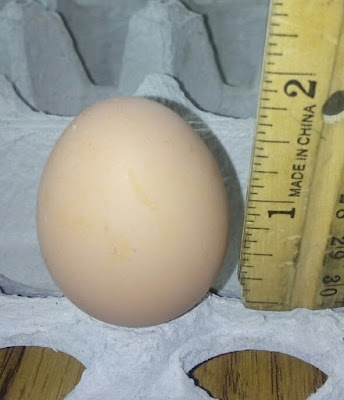 In all, we got 5 eggs on Tuesday.  Do you know what this means, friends?  This means we have five hens laying!  It also means that one of the littles (probably Hazel) lays cream colored eggs.  It also also means that someone (probably Indigo) is in the habit of laying eggs in the hen house, which I don't blame her for, because the wood shavings are deeper and cushier there, but which I do not appreciate.  Bubby and I have a plan to get her to lay in the nest box, but I'm going to give her at least one more day before implementation.


It's kind of a mystery, what's going on in the coop, but I like a good mystery.  Soon enough we will catch one or both of them in the act, and then we'll know who is laying what.  I'll keep you posted.


*****
There's another odd thing happening in the coop.  Toasty is acting like a rooster.  Like actually mounting Indigo like a rooster would.  Remember when I told you that chickens can change gender?  Um...yeah.  Except Toasty is still laying eggs, so hopefully, this is just a case of the top hen asserting her authority.  She was doing it to Hazel, too, but now that Hazel is bigger than Toasty, I haven't seen her attempt it.  So strange, but, perhaps, normal chicken behavior.  I'll keep you posted on that, too.
Posted by Scarlet Bluefield at 6:00 AM