I thought y'all might be curious as to how the garden's growing, or at least how the tomatoes and jalapenos are doing.  No salsa yet, due to the late planting.  Soon, though. 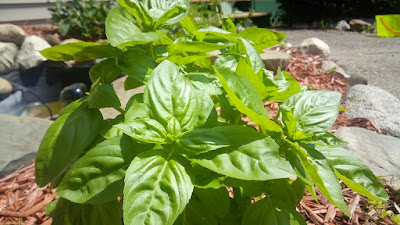 I planted basil this year, right outside the front door so I can run out and snip some when I need it.  I pruned it a couple of weeks ago, and it's doing really well.

In the background, you can see a little bit of the pond--it has a leak, but we don't know where.  Going to have to do something about that at some point. 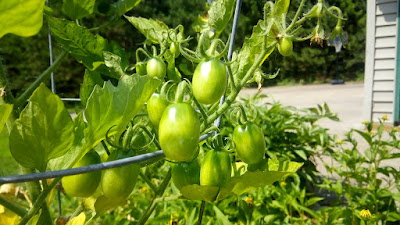 Also right outside the front door, we have one grape tomato plant.  If you have never plopped a sweet, ripe, sun-warmed grape tomato straight from the vine into your mouth, you have not lived.  Divine. 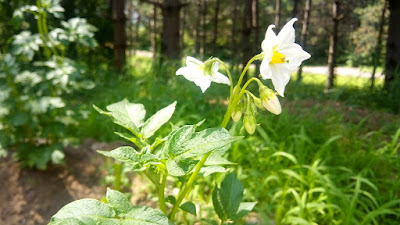 The potatoes are flowering.  Who knew potatoes had such pretty flowers?  Anyway, they're flowering, which means right now the potatoes are forming.  If we dug them now, we would get new potatoes.  It's very tempting, but I think we owe it to the experiment to keep them in the ground.  Potatoes only form between the seed potato and the top of the soil, so if/when we plant potatoes again, we are going to make it easier to bury the plants as they grow, by planting in a trench, or a bucket, or a pile of old tires. 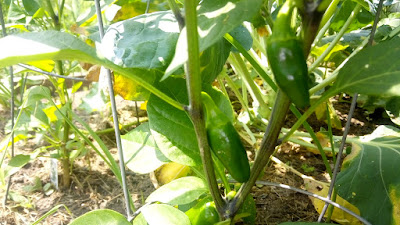 We have a few jalapenos on each of our four plants.  I have never, ever successfully grown peppers.  Guess I just wasn't planting the right kind.

The garlic that I planted in between the jalapeno plants is growing.  I'm excited to see how that turns out. 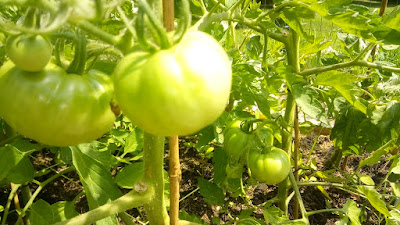 We have four different varieties of tomatoes in the back garden, and all of them are setting fruit.  I don't know if pruning the suckers is making any difference in the production of the plants, but it sure does keep the plants more manageable.  It's not quite as jungle-like as some of my previous tomato beds.

I purchased the tomatoes as transplants in four-packs, and when I got them home, I realized one of the four-packs only had three plants in it.  Oops.  And I did put at least one back on the shelf for that very reason.  So I had an empty spot in the tomato bed.  I had heard that you can root suckers to make new tomato plants.  Of course I also heard that you should put rooting powder on them and put them in water and then transplant to the garden.  I just stuck them in the dirt instead--three of them--to see what would happen, and one of them did, indeed, take root.  I noticed flower buds on that plant the other day, and it's getting big enough that it probably needs a stake. 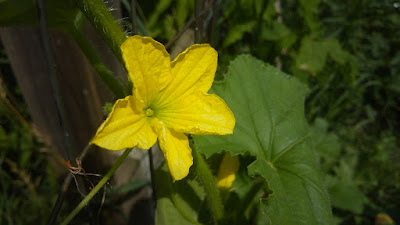 We've been seeing lots of flowers on our cantaloupe plants, but no melons yet.  I haven't started hand pollinating them, but I might, soon, if nothing develops.  As planned, the vines are climbing the fence at the back of the garden.

The Brussels sprouts are taking over their garden bed.  Who knew those things would get so big?  Well, ok, I did.  No actual sprouts, yet, and the leaves are polka dotted with holes from insects of the Brassicaceae-pest variety.  Brussels sprouts don't take too well to hot weather, which is what we've been having this summer, so I'm not holding out too much hope for them.

I deadheaded my lavender the other day, and my hands sure smelled good after that.  While I was deadheading, I noticed a lot of new growth.  I'm hoping that eventually, lavender will take over the area behind the pond--I'm trying to make that area butterfly friendly.

And I think that's it.
Posted by Scarlet Bluefield at 6:00 AM