Hey y'all.  The chicks are 10 weeks old, and possibly halfway to laying!  Here are some pictures taken during the past couple of weeks: 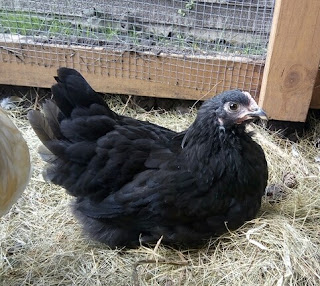 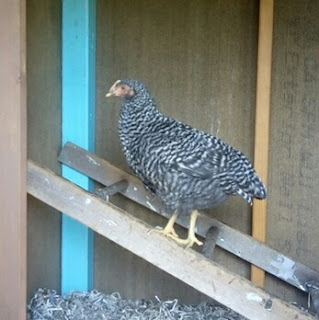 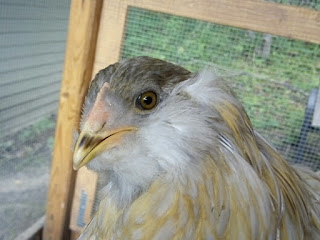 Austro and Esther chasing the worm in Red's mouth. 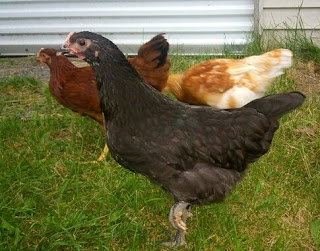 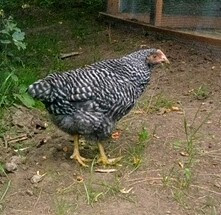 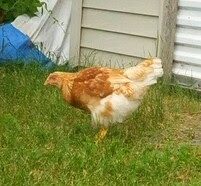 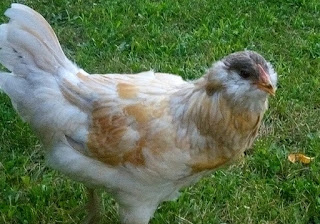 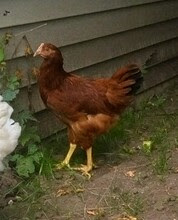 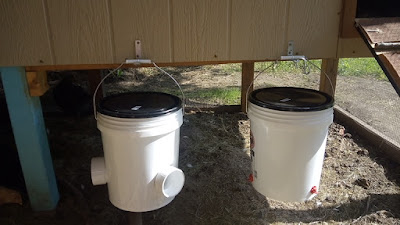 We got the larger feeder and waterer made and installed.  They'll have to be moved up a bit as the girls grow, but they're good for now. 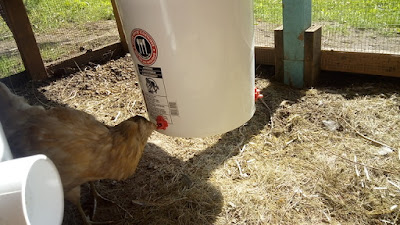 We used food grade 5 gallon buckets.  We bought these for a few dollars at a home improvement store, but to make this project even lower cost, ask at restaurants, school cafeterias, or even the bakery at your grocery store to see if they'd be willing to set aside a few buckets for you.

We used horizontal chicken nipples again, because they worked so well on the smaller waterer.  We used nipples because they keep the water cleaner, and we used horizontal (as opposed to vertical, which are cheaper) nipples so the bucket could be set on the ground for cleaning and filling. 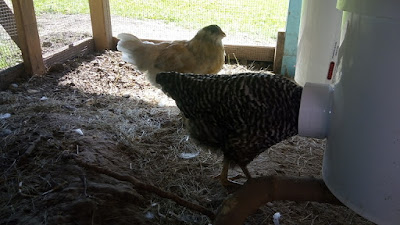 For the feeder, we used 3 inch diameter PVC 45° elbows, which cost a couple of dollars each from our local hardware store.  They're installed so that the lowest part is 3/4 inch above the bottom of the bucket.  The idea is to make it difficult for the girls to spill their food.  They have to put their whole heads inside, and when they try to beak the food out to the side, it just stays right there in the elbow.  For my five chicks, the feeder holds enough food for at least a month, and the waterer would hold enough for about 3 months (we will be cleaning it out and refilling it much more frequently than that, though).

Just in the past week or so I've noticed increased wattle (the red hangy downy things) development, which, of course set me to googling 10 week old black australorp hen and rooster images (Austro's are the most developed, but not anywhere near the 10 week roosters that google showed me).

The girls live for going outside.  It's just so much more interesting, I guess.  Yesterday for the first time, I left them outside for about an hour while I was inside.  They all survived the experience, and it even looked like some wild turkeys were checking them out while I was inside.


As I said, the girls are halfway to laying.  Maybe.  Most chickens could possibly start to lay at around 18-20 weeks, but that can vary widely depending on many factors.  I read somewhere that Silkies (fluffy-head chickens) might take a year or longer before laying their first eggs.  Toasty Crunch is bred for early lay, so she might be ready at around 16 weeks.  What all this means is we need to start getting serious about finishing the nest boxes.  It's a lot easier to train chickens to lay where they're supposed to from the start, than it is to retrain them after they've gotten into a bad habit.

That's all for now.  Until next time...
Posted by Scarlet Bluefield at 1:32 PM