Hi friends.  It's the last Friday in October, so it's time for another 18 for 2018 update.  As you know, encouraged by Gretchen and Liz from the Happier podcast, I made 18 goals for myself to accomplish in 2018.  I have accomplished 15 of my 18 goals, and have made progress on two of the remaining goals.  I've thought a lot about the third of those remaining goals, too.

Yeah.  You're right.  I haven't done a darn thing in October, either.  Well, I did look at the filing cabinet.  And I picked up a hanging file folder that was on the ground and put the papers that had fallen out of it back in to it.  And I did think about addressing those Christmas cards.  And I listened to the deep dive Gretchen and Liz took into the "Facts of Life" book, and I almost started writing down categories for my household binder.

I don't know, friends.  Is it the thought that counts?

I've lost momentum, but I haven't lost heart.  I follow the #18for2018 hashtag on Instagram, which means that anytime anyone posts publicly using that hashtag, it shows up in my feed.  None of the posts that have shown up in my feed have shown 15 or more goals completed.  In fact, I think the most I've seen was 9.  Nine completed goals, of 18.  Most have completed far fewer.  I am so far ahead.

How are you doing on your goals for this year?

Posted by Scarlet Bluefield at 2:38 PM No comments:

Menu plan for the week of October 22

Well, football season is over, for both of the kiddos, so I suppose I should actually start making menu plans again.

Wanna see what this week's meal plan looks like?  Do you?  Really?  OK, here it is:

In other news, Rocky's silhouette is startlingly chick-like these days.  She no longer has a tail, and her wings have greatly diminished in size.  I can finally tell that she's lost some feathers (I can tell that she's growing feathers, too.  Cute little pinfeathers everywhere).  The good news is the tail is generally the last part of a molting chicken to lose its feathers, so perhaps she is close to done.  For a couple of days every time she groomed a feather it would come out, and every time she shook, multiple feathers would fly off.  That hasn't been happening for a few days: further evidence, perhaps, that she is coming to the end of her molt.  I sure hope so.  Rocky hasn't been as naked as she could have been, but it's getting cold (cold being defined, at this time of year, in the context of molting, as below freezing) at night.

I've seen no further evidence of Toasty or Esther molting.  Perhaps they are being sensible and waiting until it's warmer.  Or perhaps they've read the chicken raising books that say chickens molt when they're 18 months old, which for them will be in November.  Yikes.

In other news, I received a clear message of God's loving care for all of God's people the other day.  I'm not going to attempt to explain.  I'm just going to say that it is amazing to me how God puts so many separate and unrelated events into motion to make His plans advance.  Made my scalp tingle.  There's nothing that Guy can't do.  Except stop loving us.
Posted by Scarlet Bluefield at 5:30 AM No comments:

Y'all, I surrender.  Football season has defeated me, and I can no longer maintain the facade.  There will be no more menu planning until football season is over.  We have plenty of food; no one's going to starve.  It's ok.  And it's only 2 more weeks.  I think.  Not sure how long the coaches are going to keep the sophomores practicing (and that's not really the team that makes menu planning execution difficult anyway).

So sorry to disappoint my loyal menu plan readers.  Here's some inspiration for you.

In other news, I'm engaged in Molt-Watch 2018.  Molting is the process whereby birds lose their feathers and grow new ones.  For some reason, chickens do this in the fall.  When it's getting cold.  Instead of when it's 100°F and losing feathers taking off one's feather coat makes sense.  We didn't experience molt last year because it only happens to chickens who are more than a year old.

Toasty Crunch seems to be the least affected by molting.  I've seen a few of her feathers on the ground, but no more, really, than normal.  She's decreased egg production, but we've still seen nine eggs from her in the past two weeks.  Esther, as I've mentioned, lost some feathers around her chin--her lovely, fluffy beard has been naked for a while, but I haven't noticed her losing feathers from anywhere else.  Esther has laid four eggs in the past two weeks.  On the other hand, Rocky has given us zero eggs in the past two weeks, and there are Rocky feathers everywhere.  The ground seriously looks like she's been tussling with something fierce, and losing.  But I honestly can't tell by looking at her that she's lost any feathers.  Rocky's also been spending more time off by herself, which I guess is normal.  Growing new feathers can be painful and exhausting, or so I've been told.

I've been giving the girls a little extra protein to help them along, but there's really not much else I can do for them.  I just hope they've got full coats before the cold really hits full force.  I'll keep you posted.

Y'all.  We preserved apples this weekend.  So many apples.  As I mentioned, we decided to make some apple treats besides applesauce this year.

First, I made six half pints of caramel apple jam, 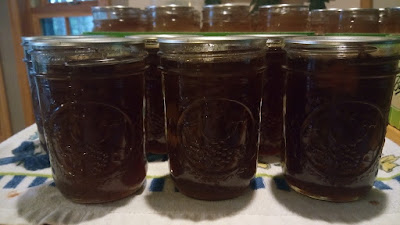 and I started a batch of apple cider vinegar with the scraps.
The next day, I thought I was making apple cider, but it turns out I was actually extracting pectin.  Whoops.  I guess that's what I get for listening to random strangers on the internet rather than using a tested, trusted recipe.
Oh wait.  I'm a random stranger on the internet.  For some of you, anyway.  Don't listen if I try to tell you how to make apple cider, kay?
So, yeah.  I've got about a gallon of apple pectin.  Or apple juice concentrate?  It's slippery.  And does not taste like apples.  But at least it's a pretty color.

Next, we started in on the applesauce.  We ended day two with 25 pints.  We decided to do mostly pints this year because they're a better size for giving away as gifts.

Day three, I made a batch of apple pie filling.  I had been planning on using a random stranger's recipe, because it sounded good, but after the apple cider pectin debacle, I reverted back to a recipe given to me by a friend a couple of years ago (recipe below--I don't know if you can trust me on this or not--it's one of those handed down recipes that has been used for years, but it's not necessarily approved by the USDA).

Then we made another 6 quarts, 10 pints, and one half pint of applesauce, for a grand total of 10.375 gallons of applesauce, to round out this years' apple preserving.

We are done.  But y'all.  We made all that with the apples from just one of our two apple trees.  I might grab some off the other tree to make muffins or apple crisp, but we're going to #feedthewildlife with most of the rest of the apples.  The deer, turkeys, bears, and chickens will thank us.

Menu plan for the week of October 1

Hi friends.  It's just as well I didn't get a menu plan post up last week, because the plan broke down on day one.  That's why I've just given up on Mondays.  Fend for yourself, it is, until football season is over.