Yes, here it is again, Science Fair Season. At this point, I've managed to release my anxiety over the effort that will be required for a repeat of last years' success, and the anxiety caused by my 2nd grade nephew's awesome science fair project earlier this year, so I'm doing well. Yes, I know it's not about me...at least it's not supposed to be about me, but the competition is intense, and since I have a degree in biology, I feel like there's no excuse for my kid turning in an inferior project. Everyone knows that parents are judged by the success, or failure, of their children, whether that's fair or not (you know you've done it, too). But I've told myself in no uncertain terms (and continue to tell myself, as needed), that it's Code-man's project, and I will support him in its completion, but he is ultimately responsible.

Anyway, the title for Code-man's science fair project this year is, "Does temperature affect stalactite and stalagmite growth?" Really. He's going to grow cave formations. I would say, "where does he come up with these things," but I know where he came up with this particular idea. I'm impressed. So now my corollary to Code-man's project has been, "Creating a warm microclimate." Code-man wants to grow speleothems in three different temperatures. We've got cold (the garage) and medium (the house), but warm is a challenge. We decided to try the crock pot on warm, and we're attempting to keep the temp between 95 and 105 degrees by turning it on and off throughout the experiment.
My "real" experiment these days is "Replicating cinnamon roll oatmeal." Code-man really likes Quaker's cinnamon roll flavor instant oatmeal, and we're almost out. I have a coupon, so I'm just waiting for it to go on sale, but then I thought, we could probably make this ourselves for much less. If you use the microwave, quick oats are just as fast as instant, and much less expensive. This could have broad reaching implications for the boys' future Boundary Waters trips.
So each morning this week I've been experimenting with my oatmeal. We're almost there--Cody told me that the cinnamon was right, but it just needs more sugar. Once I think I have it we're going to do a blind taste test. The other day I changed both the amount of cinnamon and the amount of sugar, and then as I was standing in the kitchen waiting for the microwave to ding, I mused, "oops, I probably shouldn't have changed more than one variable at a time," to which my helpful 4th grade scientist replied, "yeah, mom, you should only change one variable, because then if it works, you don't know what did it." Thanks, bud.
Sometimes I think I'm such a nerd for approaching problem solving from a scientific perspective, but I realized that I'm showing my children that science is relevant to their lives, and that the scientific method is a great way to solve problems and find answers. Score one for the nerdy science mom! 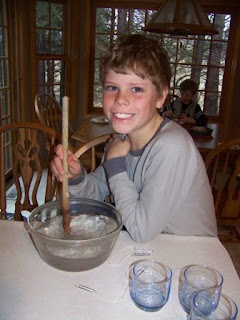 As a funny side note, this morning as Code-man was attempting to set up his experiment, Bubby had has hands everywhere. He really has talent for messing things up when it counts the most. Fed up, I decided to go get the exersaucer and plunk him down in it until Code-man had everything set. I brought Bubby down with me to retrieve it, and when he saw what I was getting he said, "oh, thanks mom!" in that cute little boy voice of his. He was actually excited to sit confined in the saucer, and, when we took him out to eat breakfast, he promptly left the table without eating and climbed back in! 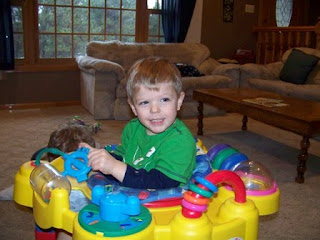 Posted by Scarlet Bluefield at 8:26 AM