In honor of Dr. Suess' birthday tomorrow, the boys made their own Suess-creatures. I wish we had had feathers or even better, a feather boa, in our craft box, but the creatures turned out well despite our limitations. 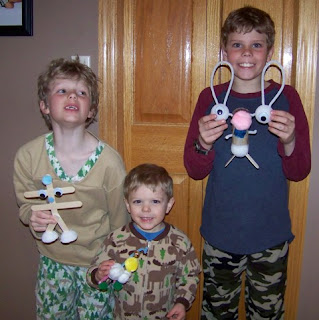 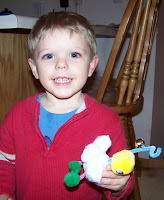 Here's a closer look at Bubby's--it sort of blends in with his PJs in the above picture, doesn't it? I couldn't get him to hold it up so you could see its eye...I would say, "hold it up," and he would hold it up over his head, and then I would say, "down a little bit," and he'd put it way down by his knees, all the while looking at me like he thought I was losing it. Finally, I said, "hold it just like this. Don't move," but he moved--you get the idea, though--it's sort of a one-eyed chick with a bell on a curlicue on its head. I personally think this one is the most Suess-like.
I probably should mention, before you start thinking I'm a super-mom or something, that this project was not completed without a fair share of whining, throwing things, a little yelling, and a bit of deep breathing and counting to 10. The children just don't seem to understand that there are three of them and I only have two hands.

Look at this big fish! Yowza. 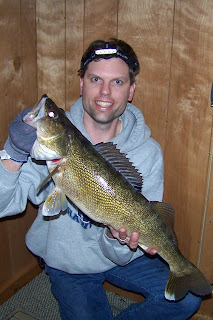 Code-man and Logo fishing in the comfort of the ice house. 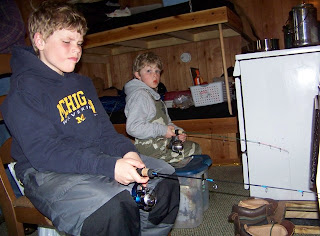 Portside Bait and Liquor: Home of the Big Mean Fish 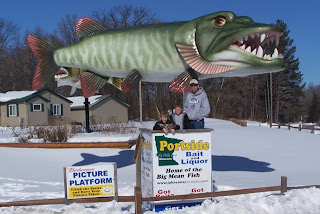 Posted by Scarlet Bluefield at 9:20 PM