As promised, here is the final post in the Boot Camp Birthday series: training exercises.

I remember a time when I did it all when it came to birthday parties {I'm not quite sure how I managed that}, but for the past several parties Hubby has been in charge of activities while I've taken care of the food and other miscellaneous details.  Hubby does a fantastic job keeping our guests entertained until it's time for cake and presents, and this year was no exception.

While the recruits were arriving, Hubby engaged those who had already arrived in a game of boot camp basketball, while they waited for the rest of the platoon to report for duty.  When the last boy arrived the recruits swarmed his transport, which must have been pretty scary, considering their warpaint and all.

Next the recruits participated in a training exercise called "catch, don't catch," to practice following orders.  The boys stood in a circle around "it" with their arms folded across their chests.  "It" (the boy in the middle) threw a ball to one of the boys in the outer circle, saying either "catch" or "don't catch," and the boy he threw it to had to do the opposite. 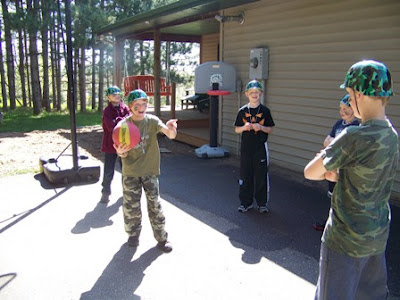 Some of the boys were really good at this game.  Others, not so much.

Next was tree climbing.  Earlier in the day Hubby had one of the monkeys place some cloth targets about 40 feet up in two trees. 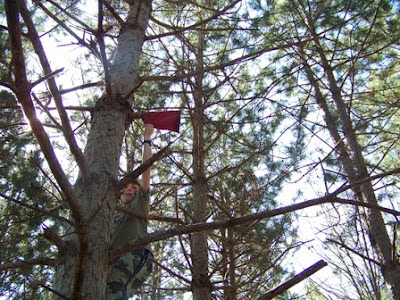 The boys took turns climbing up to touch the targets.

Next Hubby took the recruits on a tour of the obstacle course.  After learning about and practicing at each of the stations, the boys spent about half an hour running the course. 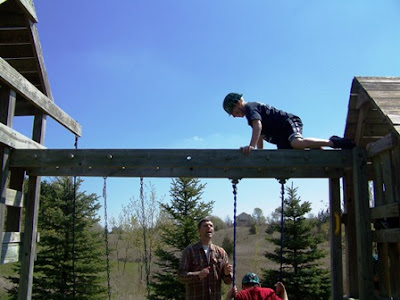 First, the recruits climbed up a rock wall into our play fort, and crawled across the top of the monkey bars to the other side.  Then they either slid down the slide or jumped off the slide and rolled, depending on their comfort level. 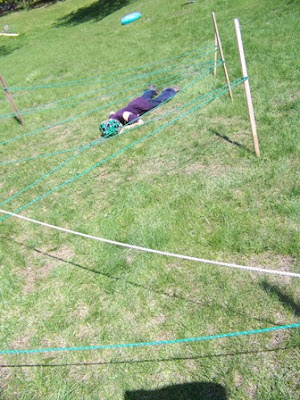 Next up, the recruits army crawled under an electrified fence (which was really rope strung up between wooden stakes). 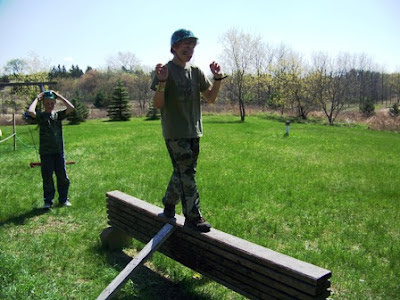 Then came a balance beam, 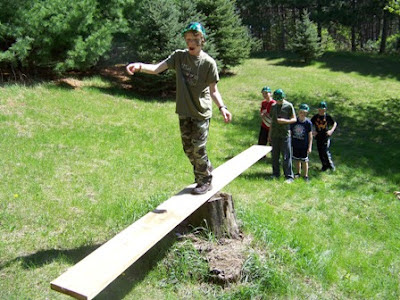 followed by a board placed over a stump, teeter-totter style.  The boys had to walk up one side and down the other. 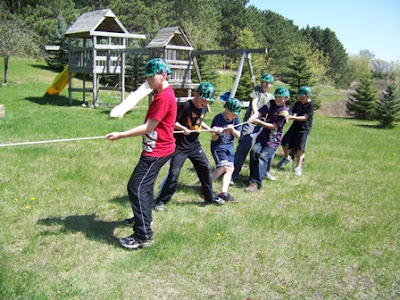 After the obstacle course, the recruits played tug of war.

We didn't even have time for grenade launching (water balloons launched toward a target) or flight training (throwing foam gliders through a hoop hung up as a target), because the boys had so much fun wearing themselves out on the obstacles.

Next it was time for lunch in the mess hall, followed by cake and presents.

After that, the recruits enjoyed some R&R checking out the tree forts and climbing trees around the training area while waiting for their transports home.

And that's it.  I think the birthday recruit enjoyed himself, and the other guys did too :)

This is the last of four Boot Camp Birthday posts.  Click here to see them all.

Posted by Scarlet Bluefield at 8:54 AM