Approximately 2 days before his 13th birthday, my oldest son informed me that he would like a mountain biking cake.
Oh, and while I was at it, I should add a bridge in the trail, over a river with a kayaker in it, and a waterfall.
Apparently he's still in the "my mom can do anything" stage. 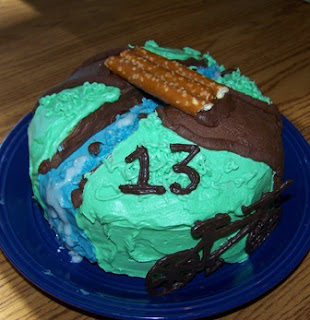 To make this cake, I used two 9 inch round cakes.  I placed one cake, curved size down, on the plate.  Then I leveled the 2nd cake, and put it cut-size down on top of the other.  To form the river, first I frosted the top of the cake blue.  Then I cut a channel from the scrap, and placed the two pieces on top of the cake.

The next step was frosting.  I used a basic buttercream recipe, tinting about half of it green and a little bit blue.  I added baking cocoa to about 1/3 of the frosting to create the brown for the path and rocks. 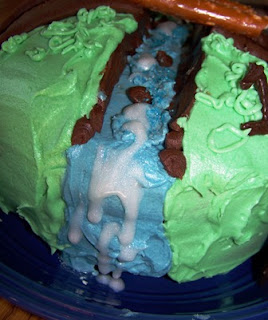 Next, I frosted the green parts, and finally I added the bike path.  To clean up the transition along the edge of the path, I piped a line of chocolate frosting along the sides.  I also piped chocolate frosting on the banks of the river, and used a wet finger to smooth it into place. 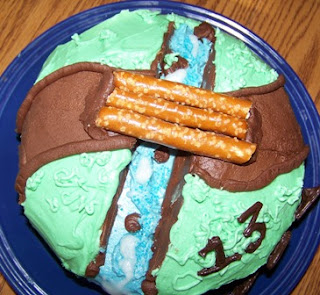 The bridge is, of course, 3 pretzel rods.  I added some chocolate frosting rocks to the river, which caused a little bit of whitewater (white glittery gel icing).  I also sprinkled some blue sugar into the river to add dimension.

We looked everywhere for a cake-sized bicycle.  Could not find one, so I put some melted chocolate into a plastic bag, cut off a corner, and piped a bike shape onto wax paper. 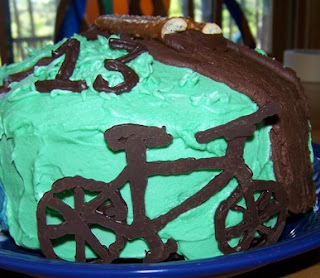 By the way, I found some cute little wire bicycle paperclips the very next day.

I didn't even bother trying to find a cake-sized kayak and kayaker.  But I did spend a good amount of time trying to decide if I thought I could make one out of...something.  Maybe if he'd given me three days...

After all of that, what really matters is: does it taste good?
And the answer? Yes.
﻿
Posted by Scarlet Bluefield at 10:05 AM