MC's birthday was last Tuesday.  He's such a great kid--not without flaws, but terrific nonetheless.  I love him.  No matter what. 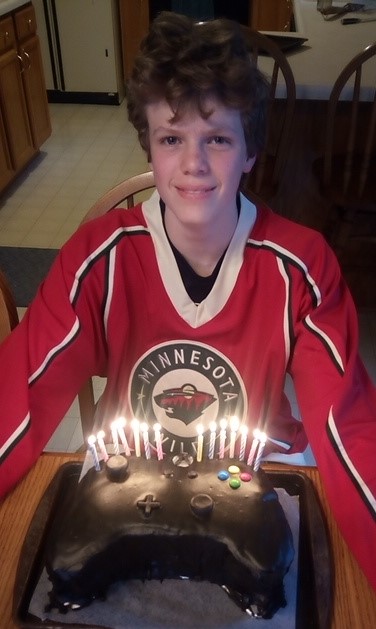 I tell him he needs a hobby, and he tells me his hobby is playing Xbox.  What I really meant was that he needs a non-electronic hobby that he can do either by himself or with others, but it is true--Xbox is his hobby.  So when MC couldn't decide what kind of cake he wanted, I figured something Xboxy would be appropriate.

One of the things he asked for for his birthday was an Xbox controller.  So I gave him one. 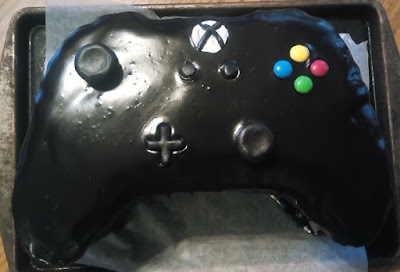 First I baked two 9 x 13 cakes.  Funfetti, in case you were wondering.  I don't know if it was just a fluke (or because I actually greased and floured the pans instead of just spraying them), but the cakes turned out flat (rather than having domed centers) so I didn't have to trim them.  I stacked them on top of each other, with chocolate frosting in between, then cut the controller shape using a template I grabbed from here (I took a screenshot, then enlarged it to just fit on an 8.5x11" piece of paper). 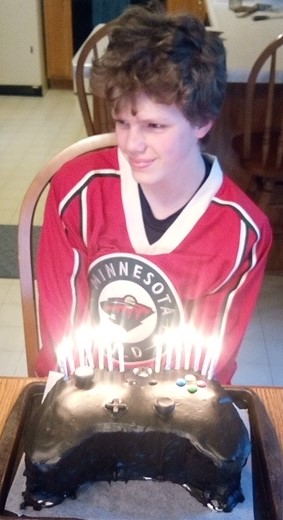 To get the smooth, plastic-ish look, most people would use fondant, but I heated store-bought chocolate frosting in the microwave, 20-30 seconds at a time, until it was pourable.  I added black food coloring and stirred until the color was uniform.  Then I carefully poured the frosting over the cake.  I was not very careful while I was cutting, so the sides were a bit rough, and I also wasn't very concerned with how the sides looked, so I didn't do much smoothing after I poured the frosting.  If you are looking for smooth sides, I would recommend icing with a crumb coat first, before pouring, then smooth as you pour/after you pour. 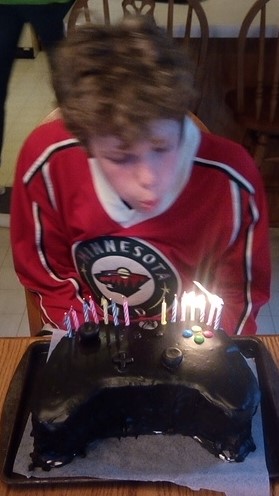 The knobs and buttons were black fondant.  Hubby ate one and immediately affirmed and commended my choice to not cover the cake in the stuff.  I used toothpicks for support under the joysticks.  The colored buttons (the ones that actually should have been black with colored letters on them) are m&ms.  I about had a heart attack when it appeared there were zero yellow m&ms in my bag of m&ms.  Upon pouring out the whole bag, I found one.  One!  In the whole bag!  The silver circle with the black x was aluminum foil with black fondant on it. 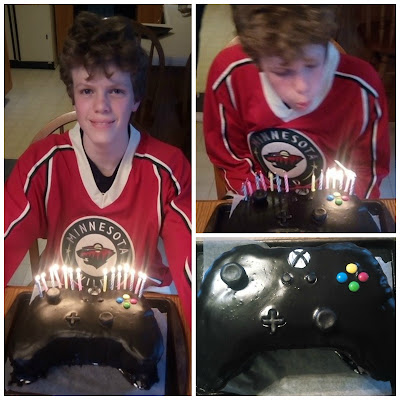 I think he liked it.

Posted by Scarlet Bluefield at 6:00 AM

Email ThisBlogThis!Share to TwitterShare to FacebookShare to Pinterest
Labels: cake