Inquiring minds want to know: got eggs, Scarlet?  Nope.  No eggs.  But I'm sure they'll come any day now.  Yup.  Any day.

Here's what the girls are looking like these days: 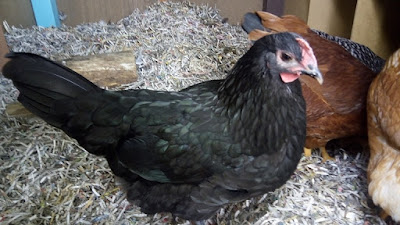 Austro.  I really wish I could get my camera to capture the green/blue sheen in her feathers.  You can see it just a little bit here.  By the way, those are the nest boxes in the background that the girls are so interested in.  For some reason, they compulsively eat the wood shavings. 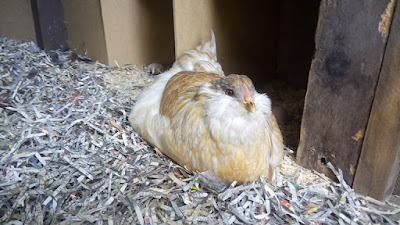 Esther is just SO FLUFFY!  Don't you just want to squeeze those cheeks?! 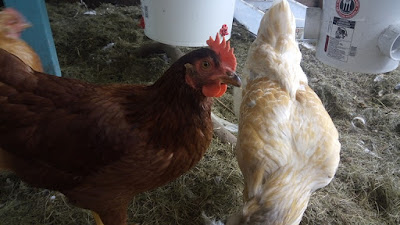 Red, looking at me like whatchu lookin' at chicken lady?  Red is definitely the leader of this crew and she's taken to following me around.  Which means they all follow me around.  I'm so flattered that they want to be with me.  Red still has the reddest comb and wattles. 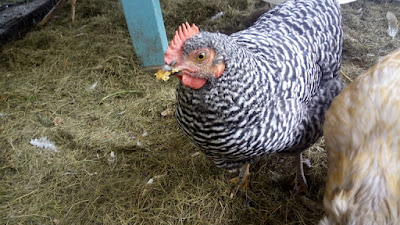 Rocky, with fermented feed on her beak.  AKD thought she looked like a grumpy old grandpa in the picture from the last update, and I have to admit, she kind of does here, too. 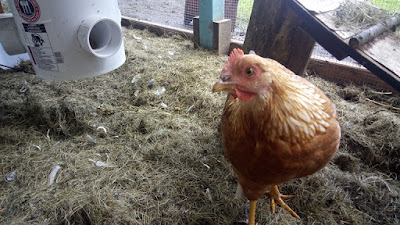 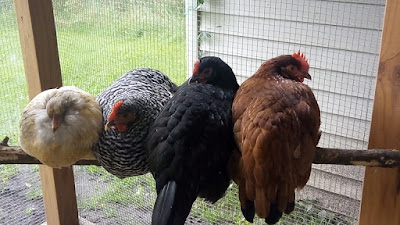 Here's a picture of the roost in the run.  It was naptime for everybody... 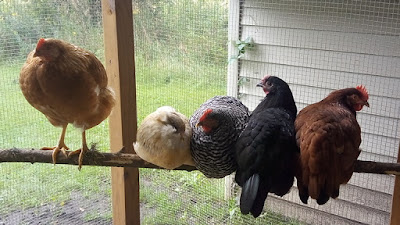 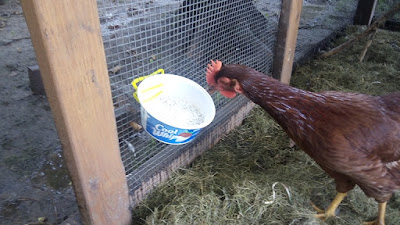 I thought that since our first 50 lb bag of chick food lasted for a little more than 10 weeks, that the 40 lb bag I bought subsequently would last for 8 weeks.  I was wrong, and since the recommendations are to feed chick food until the girls lay their first egg or are 18 weeks old (whichever comes first), I bought an additional 25 lb bag this weekend.  At the same time I picked up some oyster shell to provide supplemental calcium.  Just in case someone wants to lay an egg before the chick food is gone (chick feed has less calcium and a little more protein than layer feed).

In line with my cheap and lazy chicken directives, I used a repurposed cool whip container, attached with pipe cleaners to the wall of the run (I would have used zip ties, but I couldn't find where Hubby is hiding them).  Supposedly, chickens are self-regulating, and will only eat the oyster shell if they actually need more calcium, so it's recommended that one leave supplemental calcium out all the time.

Once the girls are laying, I can save, dry, and grind up their own egg shells to use for supplemental calcium, but I guess they could pick up microorganisms their bodies aren't used to if they eat eggshells from another source, so that will have to wait (I was disappointed that I actually had to buy oyster shell, when I had a source of calcium already, but the girls' health comes first). 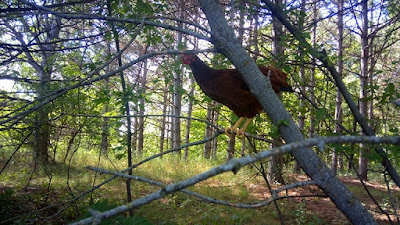 The other day, Red climbed up into this tree. 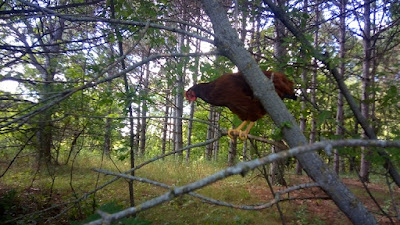 Of course, once she got up there, she wasn't quite sure how to get down.  It doesn't look like it, but she was about 6 feet up from the ground on the side she was trying to get down to.  She eventually managed a glide/flight to the ground to rejoin her sisters.

And I will leave you, once again, with fluffy chicken butts.  Here are the girls settling in for a preening session on the hen house roost. 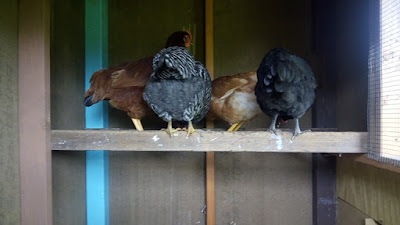 I think they need a mirror.
Posted by Scarlet Bluefield at 6:00 AM