Are y'all familiar with the I Survived series by Lauren Tarshis?  I think my first exposure was when AKD read I Survived the Sinking of the Titanic, 1912.  He went through a Titanic phase, as many boys do, during which he read pretty much every Titanic book ever written.

The books are historical fiction, aimed at about a 2nd-5th grade level, and they focus on disasters and wars and other terrifying events in history.

I was thinking we needed to add a new book to the series last weekend:
I Survived 48 Hours Without Internet, 2017!

Yeah.  It was touch and go there for a while, but we made it through.  Turns out a family of wasps had taken up residence in our junction box, and they chewed through the fiber optic cables.  What?  How is that even a thing?  And why don't they protect those things better if they're that fragile?

Anyway...that's the excuse I'm giving for not getting a menu post up this week.  That's my story and I'm sticking to it.

So the girls are 14 weeks now.

We raised the roost to its final height of about 2 feet above the hen house floor last week, opened the nest boxes, and installed some ceramic eggs.  The idea is that the eggs will show the girls where they're supposed to lay their eggs, and if they do happen to peck at them, they will quickly learn that eggs are not worth pecking at.  Because chickens are cannibals.  And we don't want any of that egg-eating nonsense going on around here.

We also put together a dust bath, and installed a roost in the run.  So far, the girls seem more interested in eating the contents of the dust bath than bathing in it.  And I don't have pictures of any of those things, because I forget to bring a camera out with me when I visit the girls.  So...I'll just leave you with this picture of a fluffy chicken butt.

And, my excuse for not giving you a garden update is...well, there's not much to share.  I never did get any tomatoes in the ground, although I finally planted the corn, about 6 weeks later than intended.  Whoops.  It's taller than me, but probably not as tall as it should be.  Despite all that, there are some ears growing.  I guess we'll just see what happens.  And, I have more corn seeds for next year.

The strawberries have done well this year, and what I'm most excited about in the strawberry realm (beside that fact that we figured out how to keep rodents from eating them) is the plants sent out runners this year that took root.  Pretty soon our 4x4' bed will be full of strawberry plants.

Our zucchini plants are finally producing.  This is the zucchini that's been selected to stay on the plant to see how big it will get.  Yeah.  Because we need to know. 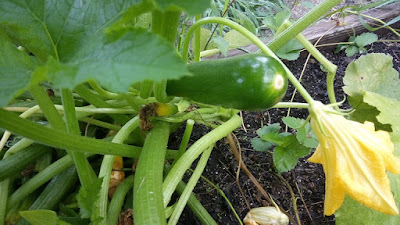 Also in the bed with the strawberries and zucchini, I planted four onions.  'Cause my sis sent them to me.  I think they're done, but it's kind of hard to tell with root veggies.  And since we don't need them for anything right now, they're staying in the ground.

I planted carrots, and a grand total of three of them sprouted.  Again, root veggies, so I'm not sure how I'll know they're ready.  I planted to rest of my carrot seeds today.  There's definitely not enough time for them to mature before we get frost, but they're in a pot, so I can easily cover them or bring them inside.  I also began a new succession planting (that's where I plant some each week for a staggered harvest) of radishes today.  They mature in about 30 days, so we should be able to get a few groups of them before frost. 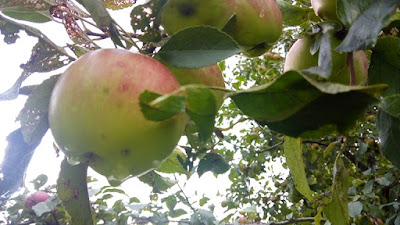 And finally, as of now, we have apples on our trees.  I feel like we had apples on our trees last year at this time, too, but somehow they all disappeared before harvest.  Hopefully we'll get something this year, because we're down to our last 8 or 9 jars of applesauce.

And that leaves me with the final update.  The kiddos started school today.  And we got pictures.  Before school.  Whoohoo!

Posted by Scarlet Bluefield at 12:22 PM