Our 2 year old nephew, Ua, broke his leg Sunday night, jumping off his bed. He got his cool blue cast put on this morning, and I guess he's been calling it his drum (the kid loves percussion instruments). His mama, Chip, says he's doing OK. He'll be able to walk on the cast, if he wants to, and he only has to wear it for 4 weeks. 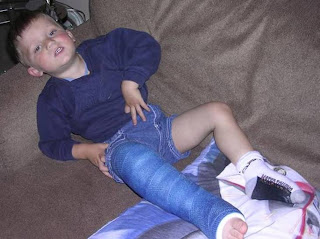 I just keep coming back to this: he broke his leg jumping off his bed. No, Ua does not have an unusually high bed--it's not a bunk bed or anything, just a regular ol' bed. All three of my children regularly jump out of things higher than Ua's bed. Just this morning, Bubby spent half an hour jumping from the arm of our couch to the floor, over and over and over again. This was after he had already spent a good 20 minutes doing flips with the assistance of my legs and/or arms. And before that he spent about 10 minutes jumping from the top of the toy box (the bigger one--almost taller than him) to the floor (he's the jumpiest of the kids, I've gotta say). How have we managed to escape with only a cracked thumb (and that wasn't a result of jumping, really) through 8 or more years of increasing numbers of children jumping from increasing heights?

Come to think of it, my brother and I used to jump out of all kinds of high places, too, and between the two of us, the only broken bones occurred when Sheppy fell on his own thumb while playing soccer. I suppose there's something to be said for all that landing practice! Mom, Dad, you did know we used to jump out of our windows in Bremerton, right? We were practicing fire drills. And conducting scientific experiments.

Ua, hope you're feeling better soon. Chip, at least it'll be easy to clip his toenails for the next month or so :-)

Posted by Scarlet Bluefield at 1:27 PM