Legend has it that Ireland is snake-free because St. Patrick chased them all away.  It isn't true, but it's a fun story.

Continuing in our St. Patty's Day theme, we decided to make snakes today.  While the kids worked, I read out loud The Last Snake in Ireland: A Story About St. Patrick by Sheila MacGill-Callahan and Will Hillenbrand.

This book tells the story, fictional, of course, of how and why St. Patrick decided to banish snakes from Ireland.  But in spite of his efforts, one pesky snake remains, and he is determined to make Patrick's life miserable. Patrick's attempts to outsmart and outrun his enemy through all of Ireland and Scotland culminate in a surprising, indeed extraordinary, turn of events.

To make your own snake, first trace a dinner plate on the color paper of your choice. I would have chosen green, but Pal wanted pink and Roger wanted red (which actually worked out perfectly, because the mischievous snake in the book is red). 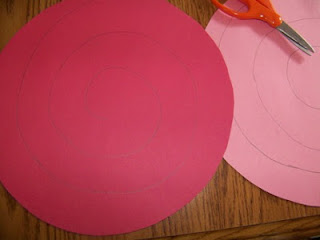 Cut out the circle, then, starting in the center, draw a spiral, all the way out to the edge of the circle. 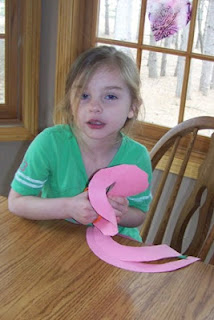 Next, cut along the line and decorate.  The center becomes the snake's head. 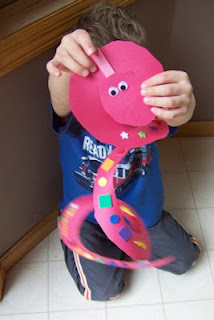 This, here, is a perfect example of having to let go and let the kids make their own creative decisions.  I was all set to have the kids make repeating patterns with foam shapes on their snakes.  So very psyched for it, in fact.  I mean, we were getting history/social studies/fairy tales in with the book, fine motor skills with the cutting, and patterning would have been the mathish icing on the slinky cupcake.  (I was so proud of myself for incorporating all that learning into one little project)  But no.  Much to my horror, Pal started out by sticking a checkered flag AND a motorcycle to her snake, followed by several lightning bolts and a "vroooom".

Luckily, Roger was a bit more open to my suggestions, allowing me to lay out these alternating shapes in rainbow colors for him to glue on...but he's got his fair share of un-snake-like objects glued to his project as well.

But I digress, back to the project.

Add some googly eyes and a tongue cut out of a contrasting color.

And there you have it.  A simply splendid serpent.

For more art projects inspired by stories, check out A Mommy's Adventures.
Posted by Scarlet Bluefield at 9:31 PM