I'm a little later this week on the garden update, but that's just because not much has changed.  Also?  It took me a while to get outside with a camera.  Also also?  We have a no electronics between 9 a.m. and 4 p.m. policy.  I'm sneaking in some time on the laptop right now.  Don't tell the kids.

It took me a while to get outside with the camera because in this, the last week of "summer,"  we've been attempting to fit in all the things we didn't get to earlier on when we were stuck in our pack-go-return-unpack-wash laundry-pack again rut.

Yesterday we went to Mars.  As you can see, one of my children was happy to be there. 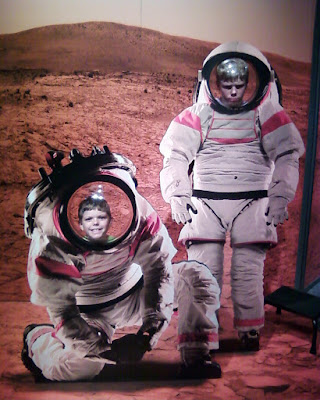 Ironically enough, the one who is not happy is the one who said in the exit poll that he would jump at the chance to go on the first manned mission to Mars.  Things that make you go hmm...

If we did colonize Mars, we would have to grow food there.  So good thing we've been practicing down here on Earth.

Bubby harvested our first carrot the other day.  Unfortunately, I didn't have the heart to thin the carrots after they germinated, so this might also be our only carrot.  We'll see.  There are a couple others that might get big enough to make them worthwhile to eat. 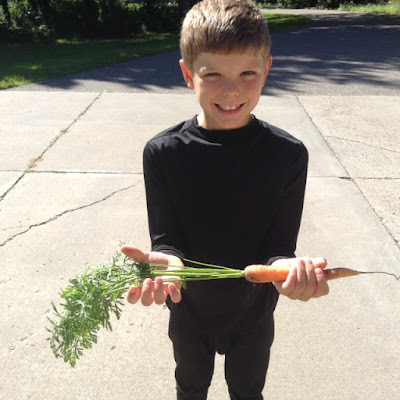 Notice he's in his top secret ninja gear.  Because you have to sneak up on the carrots.

Here's our itty bitty watermelon--it's about the size of a garbanzo bean.  I have little faith that this melon will grow enough to harvest and eat before the cold kills its vine.  You never know, though.  The spaghetti squash that was about 2 inches long 2 weeks ago is now fully grown, at about 11 inches. 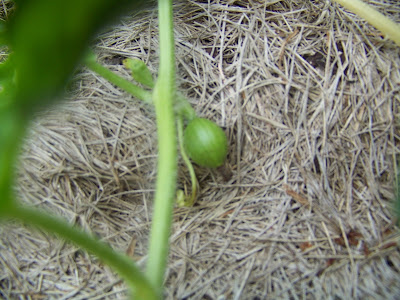 Apparently I have at least a smidgen of hope, since I haven't yanked this plant out yet.  I wonder how long we could extend the growing season by building a hot house on top of it...

The pumpkins continue to turn orange.  I'm really looking forward to having canned pumpkin to use over the winter. 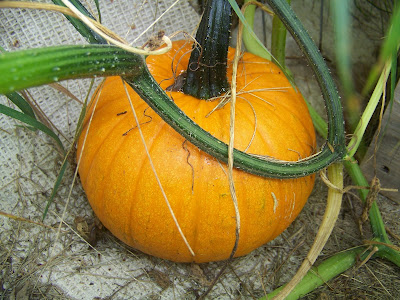 Notice I didn't say I was looking forward to canning the pumpkin to use over the winter.  I'm a little nervous about having to peel the pumpkins...

My tomatoes are having issues.  There are plenty of green tomatoes, but I just noticed brown spots on a bunch of them.  Not sure what's going on. I'm hoping to get another canner load before the end of the season. 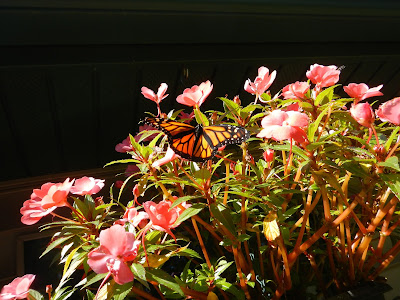 In other news, this is Star, our monarch.  We raised her from an itty bitty caterpillar, and now she's off in the world. 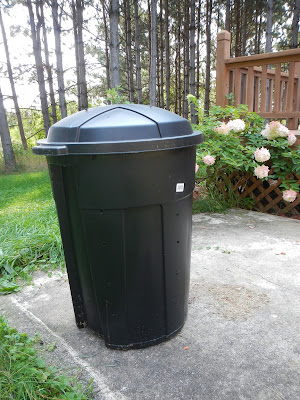 This is our super easy DIY composter (read more about how to make one here).  AKD made it for me (but hasn't quite finished).  And there's dirt in it!  Yes, I made dirt.  In a garbage can.  So exciting.  Well, as exciting as the natural process of decay can be...  Yes, my friends, I have found a way to harness the power of entropy.  Finally, entropy is on my side.

What's growing at your house?
Posted by Scarlet Bluefield at 1:16 PM