Again?  Another garden update?  Didn't we just do this last week?  Well, yes, we did, but we need to do it again, because it just changes so fast!

First up, this is the spaghetti squash that I shared a picture of in this post.  What a difference a week makes!  This thing is as big as Bubby's head!

It's beginning to pull the vine down, so I made a little sling for this guy.  Luckily, Hubby just got home from a mission trip with a couple of T-shirts he's now willing to turn into rags.  Or squash supports. 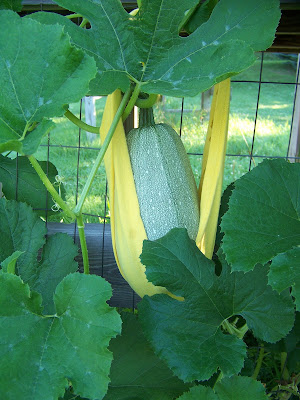 This is another spaghetti squash.  The two don't look a whole lot alike--different shape, different color, which made me wonder if perhaps I managed to get 2 different kinds of squash.  A quick search reassured me that this variation is well within the range of normal. 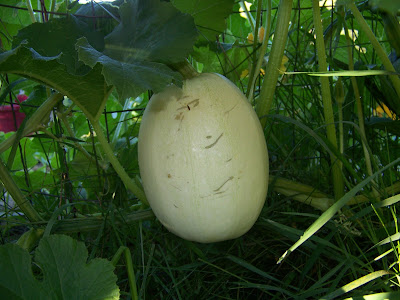 This is the pumpkin I showed in my previous post.

Speaking of pumpkins, I want a lot of them, so I've been hand pollinating them when I notice an open female flower.  Then, as they grow, I take special interest and pride in "my" pumpkins.  You know, the ones for which I feel responsible.  I note their growth with approval and think to myself, I did that.  As if I'm not responsible for the ones who were fertilized naturally.

I am not, however, fertilizing spaghetti squash.  They seem to be doing quite well on their own, thankyouverymuch.  And I don't know how to preserve the squash aside from freezing, and, well, with our "starter" freezer, I just don't have much space to dedicate to squash (the pumpkin, I'm planning to can).

Several of the tomatoes are just about ready, and none too soon--we just opened our last jar of salsa!


We have a couple of tiny honeydew melons, and I have to say, I am so excited about this!  I think honeydew is my favorite kind of melon, and to grow my own would just be so sweet.  Literally.  No watermelons yet, and it's probably too late for them to mature before frost, even if they did set fruit tomorrow.  But maybe?  Who knows?  I will be out there with my paintbrush when those female flowers appear.

I have lots of little pickling cucumbers, so it looks like Bubby will get his pickles.

Life started out rough for this valiant zucchini plant, when it was the only one of its brethren to even germinate. Now the poor thing is totally being crowded by the tomato plants, who are staging a coup to take over the garden (see photo above), knocking over their supports left and right (but mostly backwards, toward the zucchini). The pumpkins and the surprising out-of-nowhere contender spaghetti squash (see other photo above) are giving the tomatoes a run for their money, though.


The zucchini plant has one lonely squash on it, so I guess I'm going to miss national sneak zucchini onto your neighbor's porch day again.

I've pulled out all the green beans and the lettuce square that was planted first.

And that's what's happening in the garden.