!
And for the first time in a long time,  AKD had a birthday party within a few days of his actual birthday.  For the past several birthday parties, we celebrated around the end of the school year because of what happened the last time we tried to host a party in July.  One person (that's right: one) was able to come.  It was disappointing enough that we decided not to try that again.

But, because of scheduling issues (mainly the fact that Hubby wasn't home for any weekends from about mid-May through the 4th of July), we were not able to have a party in June this year.  A shutdown by a state government that shall remain nameless opened up some weekends for us, et voila!  A birthday party.  In July.

AKD invited 3 friends for a sleepover.  Here they are in the pool avoiding the camera.  Yes, they're really all in there, plus MC.  Can you see them?  I can see 3 of them, but that's because I know where to look. 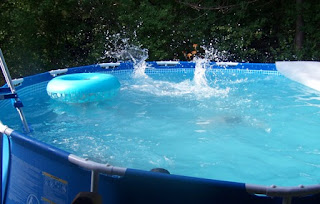 Snapped this one when they thought it was safe to come back up. 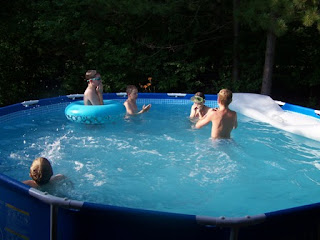 Here's AKD and his friends warming their hands over the inferno created by 11 candles. 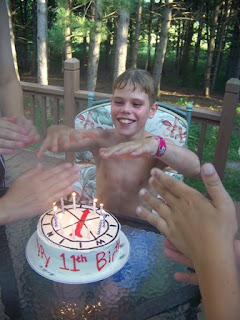 ﻿The boys had a great time, as always, spending a lot of time in the pool and a lot of time in the trees (hmmm...part fish, part monkey...)
For AKD's birthday breakfast we served this yummy Cinnamon French Toast Bake from Pillsbury.  So delicious and so easy to make.
1/4 cup LAND O LAKES® Butter, melted
2 cans (12.4 oz each) Pillsbury® refrigerated cinnamon rolls with icing
6 LAND O LAKES® Eggs
1/2 cup heavy whipping cream (I substituted 2% milk)
2 teaspoons ground cinnamon
2 teaspoons vanilla
1 cup Fisher® Chef's Naturals® Chopped Pecans
1 cup maple syrup
Garnish
Icing from cinnamon rolls
Powdered sugar
1/2 cup maple syrup, if desired
That's right: we sugared 'em up and sent them on their way :-)  For the party, I made it as specified in the recipe, but when I tested it the weekend before, I halved the recipe and added some sliced-up cooked breakfast sausage links.  Yum!
Happy, happy birthday, AKD!
(This has nothing to do with anything, but while you're over at Pillsbury, check out this recipe for Peanut Butter S'more Bars.  Double yum!)
Posted by Scarlet Bluefield at 8:07 AM