The other day, in anticipation of St. Patrick's Day, we read The Leprechaun Who Lost His Rainbow by

In this cute story, Mr. Roy G. Biv, a leprechaun, has lost his rainbow and enlists the help of a little girl named Colleen to make a new one.  As Colleen throws her red licorice, orange basketball, and yellow umbrella into Mr. Biv's hat, a beautiful rainbow begins to form.

After reading the book, we searched around and made our own rainbows using things we found around the house, just like in the book. 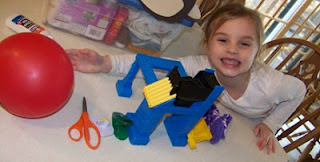 Here's Pal with a red balloon, orange scissors, yellow letter r, green chip clip, blue geotrax coal dumper thingy, and purple socks (we decided to omit indigo for simplicity, plus there was an explanation on the last page of the book saying that some scientists now say indigo isn't a separate color in the rainbow--just another shade of blue).

Next, we wanted to paint our own rainbows, but unfortunately, we were missing some colors--we only had red, yellow, and blue (don't tell the kids, but we really do have orange, green and purple, too!).  So we had to figure out how to make each of the other colors using the paint we had.

I would suggest making orange first, since it's the easiest to figure out which colors to mix--I asked the kids if we had any colors that looked sort of like orange, and they thought yellow and red would do it. They were right! 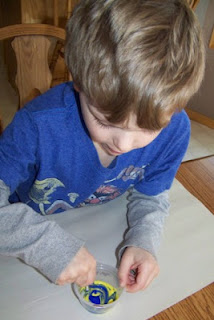 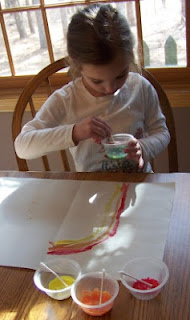 Once we had our rainbow colors, the kids painted half rainbows on their papers.  We used Q-tips to apply the paint, because I didn't have enough brushes for each kid to have 6, and I didn't want to mess with washing them.

Then, we folded the papers in half and voila!  A rainbow! 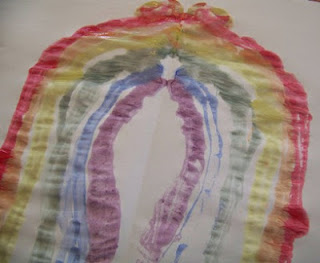 Here's one that Roger did on another day, using the non-waxy side of freezer paper, and some better quality paint (well, at least the orange and purple were better quality).  We should have spaced the colors out a little more.  I definitely like the colors on this one better, but I didn't take pictures while we were making it... 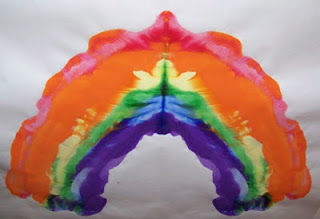 For another fun rainbow activity, check out Almost Unschoolers for their rainbow in a box.  We spent a good half hour on this one--didn't get any good pictures, though.

I'm linking this post to stART at A Mommy's Adventures.
Posted by Scarlet Bluefield at 12:00 PM