So we went camping on Lake Superior last weekend.  Have I mentioned how much I love Lake Superior?  When we retire, perhaps Hubby and I will have to live there.  That is, when we're not traveling around the country pulling our travel trailer, visiting all of the national parks. 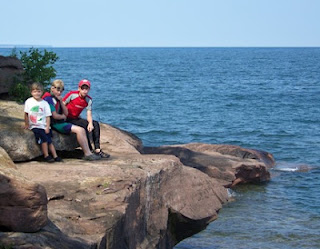 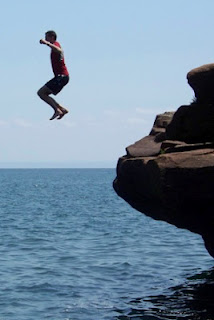 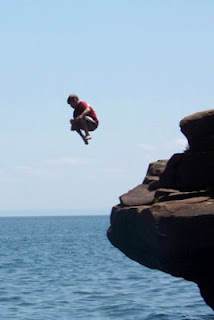 MC did not do it. 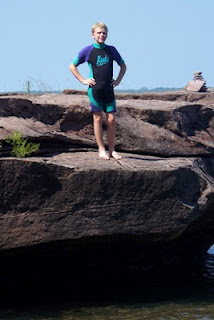 He tried, probably 5 or 6 times, but he chickened out every single time.

I made him an offer: if he jumped off the medium rock (maybe 10 feet?), I would jump off of the low rock (about 3 feet).  It wasn't enough.  Honestly, I don't think it would have been enough if I had promised to jump off the medium or high rocks, either, even though he would have loved to see me jump.  It was just too scary for him.

To tell the truth, I was relieved that MC couldn't gather the courage to jump.  Because I didn't want to jump either.  What if I didn't jump out far enough?  What if I landed wrong?  What if I misjudged the distance?

And that got me thinking.  When did I become so fearful?  Fifteen years ago, I would have just done it.  Fifteen years ago I did do it.  Well not on that particular rock, but a rock just as high.  I used to do all kinds of (not so) crazy stuff that I'm too much of a scaredy-cat to do now.  When did my courage desert me?

I think my children have stolen my courage (just like my brain cells).  It just went right out of me and in to them.  They are so amazingly brave, every single one of them.  If there is a rock or mountain or tree to climb, they'll climb it.  And then jump down.  A waterslide or snowy hill, they'll slide down it.  A roller coaster to conquer, bring it on.  Flips on a trampoline, wading through waterfalls, performing jumps on bikes, jumping from high places.  My incredibly brave children do things every day that could kill or injure them.  They have yet to discover their immortality.  And me?  Not so much anymore. 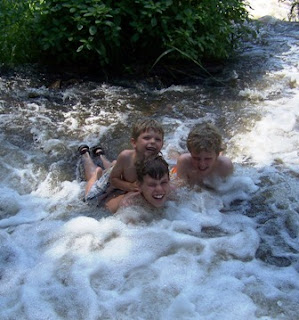 Or, perhaps my courage has transformed into a different sort of courage.  It's no longer the thrill-seeking courage of a cliff jumper, but being a mommy requires me to be just as brave, if not more so.  I am responsible for the care and well-being of three complete human children.  I am their greatest advocate, their biggest fan, their confidant, their confessor, their encourager.  I am the person who will always love them, and always believe in them.  Without me, where would they be?  The responsibility is staggering, but even in the face of all that, I carry on.  And that takes guts.


Have I not commanded you? Be strong and courageous.
Do not be afraid; do not be discouraged,
for the Lord your God will be with you wherever you go.
Joshua 1:9 (NIV)
Posted by Scarlet Bluefield at 1:30 PM