This weekend was the Hot Air Affair in Hudson, billed as the largest hot air balloon festival in the midwest. Of course we went to the parade and fireworks over the St. Croix on Friday evening. 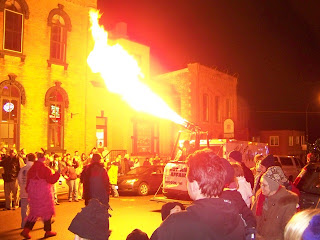 Impressive, isn't it? It gets pretty warm as the balloonists pass by with their burners blazing. On Saturday, we attempted to watch the mass launch, but it was canceled. We are now 0 for 3 on Hot Air Affair balloon launches. Each year we've gone, they've canceled the launch the day we decided to go, and they've launched the other morning. Sure enough, they launched Sunday morning. Last year we saw dozens of balloons over the St. Croix as we were driving to church. It makes me wonder how many of the 40 launches (this was the festival's 20th year, and two launches are scheduled per year) have actually happened. I wonder if they keep statistics. For more information visit: http://www.hudsonhotairaffair.com/index.htm

On Sunday afternoon Cody worked on his science fair experiment. He is doing paper chromatography to study and compare the dyes used to color M&Ms and Skittles. Pretty exciting stuff. First we extracted the dyes by placing the candies in little puddles of water (we had to "dispose" of the candies after letting them sit for one minute. We offered to let Logan help us "dispose" of them, but he was put off by the lack of color on one side), then Cody spotted the dyes onto filter paper. 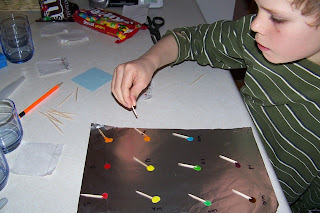 After the dye dots were dry, he developed the chromatograph using a 1% salt solution. 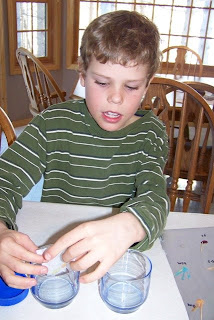 The developing solution moves through the paper by capillary action, taking the dyes along with it. Different substances like being disolved in the solution more than others, so those substances move farther up the paper substrate, thus separating from each other (from the chromatograph below, you can tell that the blue dye likes being dissolved in the salt solution the most; red the least. I wonder if that's somehow related to the wavelength of the light required to bounce off for us to see it. Probably somehow). 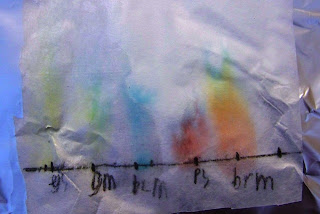 This is, from left to right, the chromatograph of the green Skittle, green M&M, blue M&M, purple Skittle, and brown M&M. We noticed that the purple Skittle and the brown M&M were very similar in color before we extracted their dyes, but the little puddles of dye were definitely purple and brown, definitely different. You can see from the chromatograph that they're made up of different colors of dye. They both had red and blue dyes, but purple's blue component is darker, and brown also had yellow and orange.

We woke up this morning to find that our driveway had been transformed into an ice skating rink over night...a hilly ice skating rink. It was interesting getting to the bus stop this morning. Scott managed to get out in the Saturn, though, after placing some icemelt stratigically on the uphill slope, and I noticed when I looked out the window a couple of minutes ago that the ice up by the house appears to be melting.

Posted by Scarlet Bluefield at 9:22 AM