Scott, Cody, and Logan went ice fishing with the Cub Scouts on Saturday. This is Cody's third year as a Cub Scout and the first year that the ice fishing outing hasn't been canceled. They met last Thursday to make their own ice fishing poles, and Saturday they headed out. 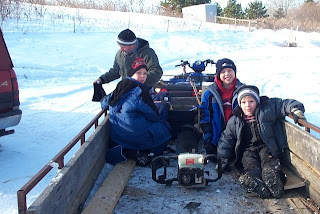 Scott and our boys headed out early along with a few others to start drilling holes. Cody's friend's Dad gave them a ride to the fishing spot in his ATV's trailer. 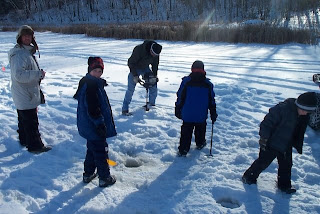 Scott tells me the ice was around 18 inches thick, which is thick enough to drive a truck on (the ice auger is about 24" long, to give you an idea). 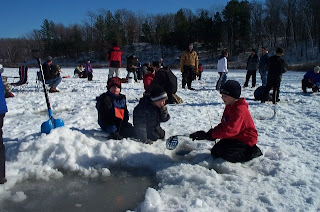 Here are Cody and Logan with Cody's friend Derek (you've seen him before, spinning). Looks like quite a large hole in the ice, eh? Hope they didn't lose any kids down there (don't worry--the hole's not really that big). Scott tells me there were around 50 people there, which is more than show up to a typical pack meeting. Hmmm.

Saturday was such a nice day (I think it got up to 45 or so), but Caleb and I didn't spend any time outdoors. We were planning on going out with everyone after they got home, but I guess they were all outsided-out by then. So we ended up doing some night sledding on Saturday evening after supper. Scott brought out the big spotlight that he uses when he snowblows, and all the boys (except Caleb) were wearing their headlamps. It was quite windy, but it was a warm wind, and we had a blast. Even Caleb was having fun--this was the first time that he was actually asking to sled, again and again. Didn't get any pictures, because of course no one thought to bring the camera out (or actually, I did, but too late). I recall saying that we needed to do this again when there's a full moon, so maybe I'll remember the camera sooner next time...

Posted by Scarlet Bluefield at 9:22 AM