It all started when, a couple of weeks ago, I decided I wanted to build a Lego dump truck.  From the instructions. 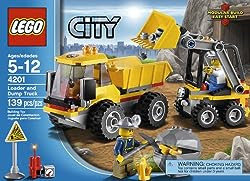 It was, in fact, this dump truck.

OK, let's back up.  It actually started many moons ago, when 5 year old AKD received his first Lego set.  I am a rule-follower.  An instruction-reader.  When it suits me, that is.  I am concerned with doing things the right way.  And I wanted to keep all of the Lego pieces from each individual set in their own individual containers.  So we could easily find all the pieces and build the sets again.

AKD is not so much of a rule follower, at least when it comes to Lego.  He preferred (still does) to build the set once, and then cannibalize that set to make exciting new creations.  I admire that about AKD.  I really do.  But it drives my inner compulsive neatener bonkers.

And so we ended up, many years, and 2 more children (one of whom prefers to keep his Lego creations together and the other of whom prefers to tear his apart to recombine in new and interesting ways), later with a HUGE bin full of almost every Lego piece that's ever made its way into our possession.

So, back to a couple of weeks ago.  I found the instructions for the dump truck.  It was a little dump truck, with not so many pieces, and I figured it would be pretty easy to find the pieces and put it together.

I don't know how many Lego bricks we have, but it numbers in the thousands, maybe even tens of thousands.  And finding the one small black or gray or yellow piece that I needed among all of those thousands of Legos proved ... difficult.

Enough, I decided, and I set out right then and there to sort the bricks.  I recruited some helpers, and they were, shall we say, less than enthusiastic about the project.

We went with color.  Because it's the least ambiguous of the methods.  A piece is either black or not black, red or not red.  Except the pieces that are black and gray or yellow and black.

And now, we have this:

Isn't it beautiful?  A tower of bricks, neatly organized by color.*

And I still can't find all the pieces for my dump truck.

The rule-follower in me feels a little thrill every time I see the beautiful order my team and I brought to the cacophony of Lego.  The realistic mama in me realizes it's only a matter of time before this system fails, becoming, once more, a jumbled mess.

And, if I'm honest, I think my Lego builders find that jumbled mess to be infinitely more inspiring than my beautiful organized drawers.

How do you store your Lego?  Do you build them and keep them together?  Jumble all the pieces together?  Or do something in between?

* Wondering where I got this gorgeous unit?  It's actually two 6-drawer scrapbook paper organizers that I found on clearance at Target.  They're similar to this (I can't find this exact one online, which, you know, makes sense, considering they don't make it anymore).