I thought it was probably time for a garden update.   Things are growing. 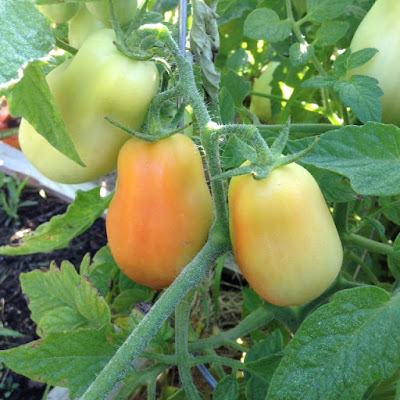 I seriously love this picture.  Isn't that such a pretty color?  These are some of my San Marzano tomatoes.  I planted mostly plum tomatoes this year because they're better for canning.  The tomato plants are huge!  Like, if they had better support, I think they'd get taller than me.  It's looking good for being able to can lots of tomatoes this year.

Remember when I said I hoped the beans and lettuce would be done producing before the squashes and melons took over the bed?  Um, well, didn't quite happen... The beans are almost done, that's true.  And I realized I don't know how to tell when the lettuce is done.  It still tastes bitter to me.  Or maybe it was bitter, and then sweet, and now it's bitter again, and I missed my window.  In any case, the pie pumpkins and spaghetti squash vines are going everywhere.  I've managed to keep them away from the beans and lettuce thus far, but pretty soon they'll be out of control. 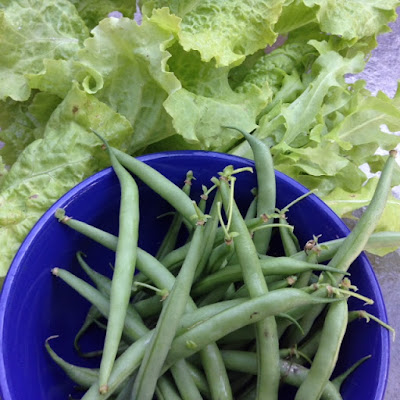 I picked some lettuce this morning, and I'm taking it over to the chickens this afternoon.  The green beans are going in the freezer today.

One of the reasons why square foot gardening works is because plants are encouraged to grow up instead of out and over the ground.  Anything that vines or climbs is grown on a trellis or frame of some sort.  Here are some of the spaghetti squash vines. 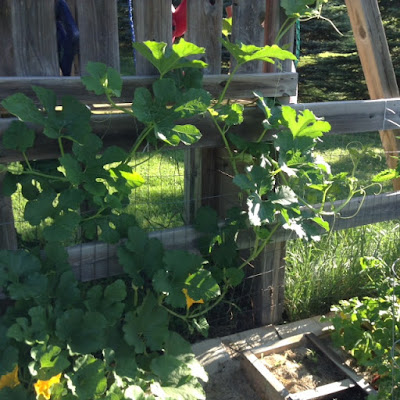 I'm hoping next year, the boys will make something like this for my squashes and beans to grow up.


Here's one of my pie pumpkins.  Yes, hubby carpeted the area surrounding the garden for me.  Because he loves me.  Also it makes weed suppression simple. 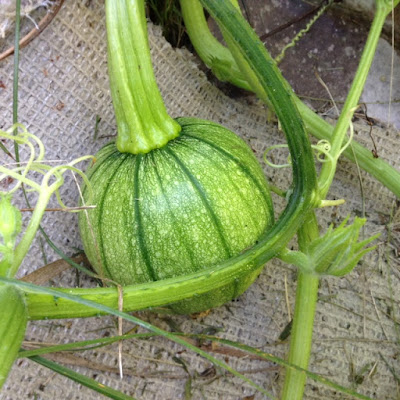 And a spaghetti squash.  The squashes that are growing above the ground will need to be supported as they get bigger. 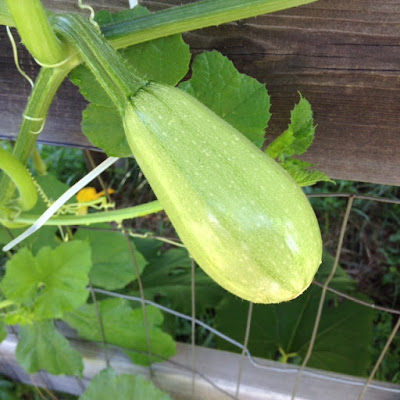 The sugar snap peas are done, and we've been eating grape tomatoes as they ripen.  We haven't seen much from the cucumbers pickles or melons yet, but they're coming.  We had to plant so late that we might not actually get fruit this year.  The zucchini is just getting started.  I think the tomatoes are kind of crowding it/shading it a bit.  The carrots are growing.  Nowhere near big enough to harvest yet, though.

I'm pleased with the garden this year.  It's so satisfying to plant something with my own two hands, and have it grow into something beautiful and nourishing.

And of course, I'm already thinking about what I want to do differently next year.  Here are some of the changes I'm hoping to make:

And then there's this beauty.  We may not be able to keep fish alive in our pond (they either die within days or mysteriously disappear, possibly eaten by squirrels), but we can grow flowers. 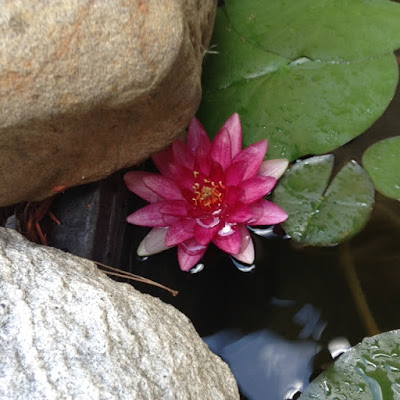 What's growing for you these days?
Posted by Scarlet Bluefield at 6:00 AM