Tomorrow is my oldest son's birthday.  You know what this means, right?  Yes, indeedy, this means it's time to post the pictures of my middlest son's birthday cake.  You know, the cake we ate and the birthday we celebrated in April?  Yeah, that one.  This is what you call a last chance, here.

For his 12th birthday, MC requested a camping cake.  I have a strong suspicion that the request was a direct result of this incident with a Cub Scout cake and its inedible decorations. 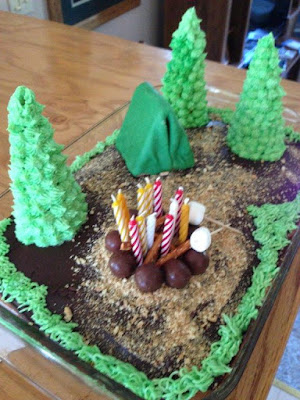 Cute, huh?  And, most importantly to the birthday boy, all edible (except the candles and marshmallow sticks).  The trees are sugar cones frosted with a star tip.  The tent is a couple of graham cracker halves covered in modeling chocolate.  The fire ring is made of whoppers candies, and the logs are pretzel sticks.  The dirt is chocolate frosting along with graham cracker crumbs.  I used my grass tip along the edges of the cake.

I did make a trunk for one of the trees by putting it on a pretzel rod stuck into the cake, but the 9x13" single layer cake was not thick enough to hold up the weight of the pretzel and frosting-laden cone, so I had to put all the trees on the ground.  I suggest an at least 2 layer cake if you're wanting your trees to be off the ground. 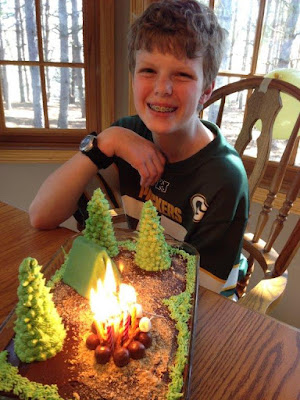 When we lit the 12 candles, it was a blazing inferno of a campfire.  Much higher than a scale Boy Scout's knees would have been.  Whoops.

So, of course, the birthday boy and his goofy Daddy did the only sensible thing. 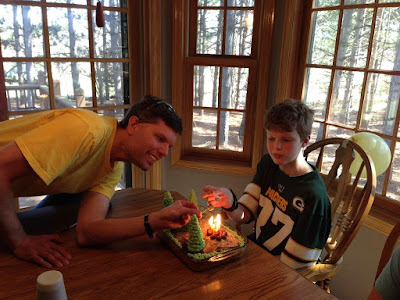 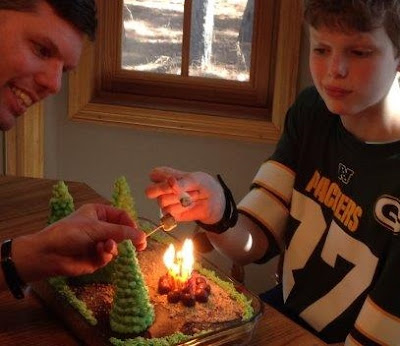 Happy birthday, MC!
Posted by Scarlet Bluefield at 6:00 AM