I've never really considered myself to be a skier.  The first time I ever skied was during my senior year of college.  I had to take 4 PE classes for my degree, and my friend Bob convinced me to try cross country skiing for one of them.  He even had skis and boots and poles for me, and offered to wax my skis every week.

It was a lot of fun, and I got pretty good at it.  Fun fact: I never, ever fell going downhill.  The only times I fell were when I was going uphill.  Funny, huh?  You would think the higher speeds assisted by gravity would encourage falls more than the slower speed of fighting gravity.  Not for this girl.

After we were married, Hubby and I would go skiing together.  Not regularly, but several times each winter.  Then we moved to a less snowy location and the kids came along.  I took a hiatus from skiing, but vowed to get back to it someday. 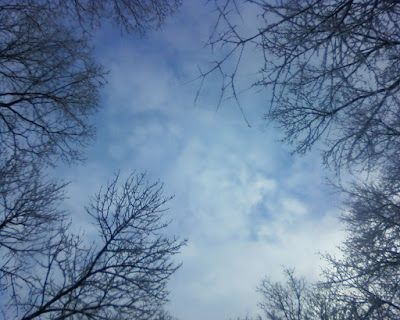 So here I am, back in a place where there is snow on the ground for most of the winter, and there are trails that are groomed.  And I'm back to skiing.

It's a funny thing.  I seem to remember being a whole lot more graceful way back when.  I'm trying to figure out if my equipment is at fault, or if I can blame on the terrain and trail conditions, or if my memory is faulty, and I never was very good at it.

I think it's probably a bit of each.

But I'm skiing again, regularly, even, and I'm loving it, even though I feel like mostly I'm just walking around in the snow with long skinny boards on my feet.  Good thing I rarely see anyone on the trail.

Surely there was more glide in my stride back in 1995. 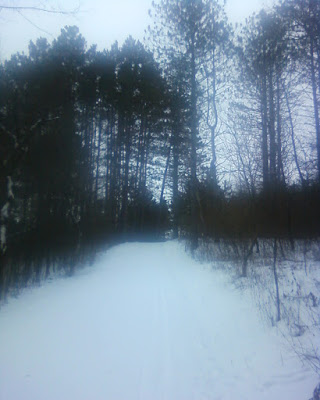 The other day, I passed a cute couple skiing together, so apparently there is at least a little glide going on in my technique.  We were on the river loop, a side trail that goes out to the river.  They were going slow.  So slow.  And I was going slow, too.  Because I was behind them, and I couldn't remember the trail etiquette for passing.  Do I call out to them?  Do they get out of the tracks or do I need to pass them in the center "skate" zone?  Which, let me tell you, would have been an embarrassing disaster.  I remember being able to "skate," but apparently, my body does not.

We came to the river, and they stopped to look.  The woman saw me behind them, and told her man to get out of the tracks so I could pass.  Grateful, I said thank you, and skied on past.  In response to my thank you, the woman said, "it's no bother, we're in no hurry.  No hurry at all."  And she smiled the most glorious smile. 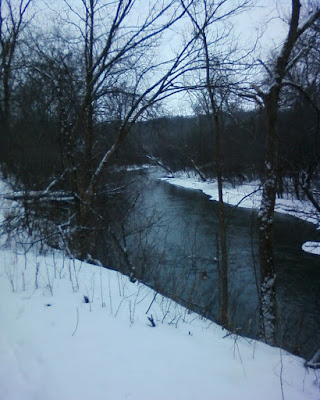 Posted by Scarlet Bluefield at 6:30 AM